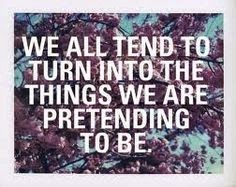 So at the end of my first year at Harvard, a student who had not talked in class the entire semester, who I had said, "Look, you've gotta participate or else you're going to fail," came into my office. I really didn't know her at all. And she said, she came in totally defeated, and she said, "I'm not supposed to be here." And that was the moment for me. Because two things happened. One was that I realized, oh my gosh, I don't feel like that anymore. You know. I don't feel that anymore, but she does, and I get that feeling. And the second was, she is supposed to be here! Like, she can fake it, she can become it. So I was like, "Yes, you are! You are supposed to be here! And tomorrow you're going to fake it, you're going to make yourself powerful, and, you know, you're gonna — " (Applause) (Applause) "And you're going to go into the classroom, and you are going to give the best comment ever." You know? And she gave the best comment ever, and people turned around and they were like, oh my God, I didn't even notice her sitting there, you know? (Laughter)
She comes back to me months later, and I realized that she had not just faked it till she made it, she had actually faked it till she became it. So she had changed. And so I want to say to you, don't fake it till you make it. Fake it till you become it. You know? It's not — Do it enough until you actually become it and internalize. - Amy Cuddy

This Talk took me by surprise a little - I had skipped past it a few times on the TED site thinking that I wouldn't find anything to say about it (obviously this was an assumption that was not based on any actual investigation). But I watched it this evening and recognised something within it that I have been struggling to verbalise to people who are stuck in a rut, people who have the power and opportunity to change themselves but have just not been doing it (usually from the belief that "I can't do it" or a vicious cycle of self judgements that they keep participating in and really making themselves feel like crap). This something is fake it 'till you become it.

When you're setting out to change something about yourself it's not going to happen magically on it's own - you have to be the driving force behind it. Changing a pattern of behaviour or a thought pattern requires that you actually do the new behaviour that you want to live and stop the old behaviour. This concept of fake it till you become it is exactly it - you have to practice and push yourself to do things and behave in ways that are outside your comfort zone and that may seem scary. The first important thing you must make sure of is that that fear of "what if (I do it badly, it ends up being the wrong choice, I can't do it...)" doesn't stop you. Obviously changing yourself is going to need practice, so you won't get it perfect the first (or second, or third, or even hundredth) time - but you have to keep practicing until you become the new pattern that you feel will benefit, the pattern that you actually want to live in your life.

The part where so many people get stuck is in thinking about how things could turn out (all those what if's) and thinking about how they are incapable of doing whatever it is that they'd really like to do. Obviously those thoughts can develop into a vicious cycle - but every cycle can be broken by exactly what I am saying in this post: You can fake it till you become it - close your eyes, take a deep breath and DO IT.

I learned this particular approach and terminology with my horsemanship instructor. I was a very shy and introverted person for most of my childhood and some of my teen years - some points I had overcome by then but not all. So when I started lessons with my teacher she told me the importance of body language when you're working with a horse because that is how they communicate. So I had to push myself to stop slouching, lift my chin up and step forward strongly in order to move this half-ton horse around and to develop a relationship where he respects my "personal space" (therefore he is less likely to do things like bash me with his head or step on my foot).

In more recent times I have been deliberately placing myself in situations that I am usually uncomfortable in, or in a situation where I am faced with doing something I want to do but have a fear of doing for whatever reason. Just because I put myself in these situations on purpose doesn't mean that I don't still feel uncomfortable or nervous - but when I move past the thoughts and expectations of what I think something will be like or feel like, I realise that what I imagined it to be is completely unrealistic compared to what it actually is like.

The same can be said for almost every point in your life that you have imagined doing without any real investigation for yourself - usually you've blown it way out of proportion and you're now at the point where it's become this giant entity in your mind that you think is going to crush you if you try to approach it. Obviously the big scary monster is all in your imagination and once you face yourself and do the thing you're so afraid of, you will not only overcome that fear but you will also empower yourself to face even more of yourself with courage and confidence.
Amy Cuddy bernard poolman change desteni empower equal fantasy fear future imagine improvement life posture projection psychology self strong stuck TED Talk what if