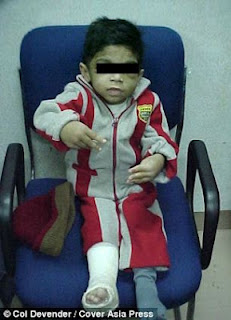 It is well established that humans are assholes, we do all sorts of depraved and selfish things for no reason other than we can. Why should we allow our parasitic race to continue multiplying? All we're going to do is fuck shit up. Our shit. Animals' shit. Planet's shit. Universe's shit. Plants' shit. Other people's shit. All kinds of shit is gonna get fucked up.

The fact that parents abuse their children as in the article above is enough to sentence us all to death. How the fuck does that situation get to the point of the child being abused for years without any kind of intervention? How are people allowed to become parents when they are in no way prepared for it?

I forgive myself for not realizing that the entire history of humanity has been the endless looping of abuse where each new generation is bestowed with the fucked up nature of their parents.

I forgive myself for not realizing that parents are evil fuckers who procreate through profuse fuckery and are not prepared to raise their children to be anything other than new evil fucker copies of themselves.

I forgive myself for not realizing that until people begin to understand how the system works and how their own bodies and minds as systems work, we will just keep on moving through the cycles of past generations.

I forgive myself for not realizing that no parent can claim to love their child as they are all seemingly unaware of the harm they do to their children out of ignorance - and they do not even realizie they are harming their child.

I commit myself to showing how human history and present day is stuck on repeat.

I commit myself to show people that every parent is just another fucker and that we are so self-obsessed that we do not realize that we are just turning our children into copied of ourselves.

I commit myself to live as an example of understanding how we as systems work and how our creation, the system around us, works.

I commit myself to show people how to get unstuck from the web that we have spun as that who we think we are and who we think our children are.

I commit myself to show people how each action based in ignorance is abuse, as the parent as the ignorant actor does not honestly know what the outcome will be.
7 year journey abuse activism activist advice cerise poolman child desteni equal life equal money guidance neglect parenting tips torture