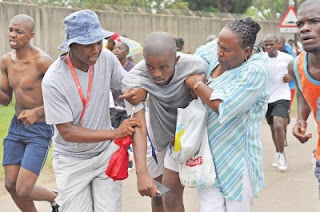 This is based on a new article published by The Witness newspaper, uncovering more details about the massive Department of Transport screw up in KZN, South Africa last week. Read more about the story in my previous post.

So another Fitness Test related death has been reported, bringing the total number of deaths up to 8. It has also emerged that some of the candidates shortlisted for the trainee traffic officer posts applied for jobs more than 6 years ago, as well as some of the candidates not having the requisite driver's licenses. The 35 000 job candidates were unaware that there were only 90 positions available, so they followed instructions to descend upon a small stadium in Pietermaritzburg in 2 groups of 17 500. Insiders in the Dept of Transport said that the process was a mess right from the start: the shortlisting process had already cost more than the total pay of the 90 jobs advertised, long before the fitness tests took place. Staff were brought in from regions throughout the province to help whittle the 150 000 applications down to 35 000 and the department had to pay for their accommodation. Staff worked 7 days a week - even on Christmas day and the Day of Goodwill (Boxing Day in USA). From what The Witness has been able to gather, it appears as if no one checked the basic requirements before candidates were sent out in the sweltering heat to run 4km. No Water was provided and the candidates could not find seating or shelter from the blazing sun. Applicants were not initially required to sign indemnity forms, but following the collapse of some of the recruits on Thursday, those who ran on Friday were told to sign - and if they refused they would forfeit the chance of getting a job. The small stadium where this test took place has capacity for only 10 000, but 17 500 people filled the stadium for the fitness tests. The municipality was also not informed of the mass gathering to be taking place, as is required by law. The spokesman for the Dept of Transport has refused to comment on the actions of the department.

A MAN who underwent the physical test for a job as a traffic officer yesterday described the hell he went through, only to miss the cut-off time by three minutes.
The man, who asked not to be named as he wants to re-apply for a post with the Road Traffic Inspectorate, said the four kilometre run was more of a stampede by desperate job applicants than a fitness assessment.
“I was running in a pack of about 100 people who were pushing and tripping others at the sides and back in a stampede.
“I almost fell three or four times. At one point we had to pass through a narrow space of a metre wide and there were 50 people trying to squeeze through at the same time.
“It was chaotic, unprofessional and unorganised.”
He said he also saw a pregnant woman running.
“She was obviously pregnant and I heard her telling other women there that she was pregnant.”
There were also people from as far afield as Johannesburg who were hoping to get a job.
The man said that although he was not in peak physical condition, he was fairly fit.
“We waited for six hours. There were no taps.
“If you tried to go to the toilet there were 50 people in the queue.
“We had nowhere to store our IDs and driver’s licenses while we ran, so we had to carry them with us. There was nowhere to sit, so we sat on the hot cement.
“It was very humid and hot. It was quite a run, even for those who had trained. I saw one guy who looked like a runner collapse and realised I had to slow down a bit. People were breathing hard.”
He was also unimpressed with the insulting attitude of the officers administering the process. “They called us idiots and cakes.”
Even overweight people were allowed to compete, he said.- The Witness

What would you do, if you were trying to give your family a better life by trying to get a better job: would you sign an indemnity form as the candidates were required to, or would you have given up the opportunity for a job and not signed? Would you not run the 4 km (2,85 miles) in the sweltering heat, this possibly being the only decent job opportunity you will have in years?

Why do we force these choices upon each other: sign or fuck off! Why would we not want to give to others what we would like to receive? Why do we choose to make life so difficult?
bernard poolman corruption death desteni earn economy employment equal government incompetent inept job life money opportunity politics south africa survive tragedy