December 31, 2012
This is based on an article taken from today's edition of The Witness, titled "Traffic Test Tragedy":

A 28 year old man, Lenny Nxumalo, was among 7 deaths resulting from a fitness test for a position of traffic officer at the Department Of Transport. An advert was placed, seeking to fill 90 traffic officer positions - 150 000 people applied for the position. Of those 150 000 applicants, 35 000 were short-listed and then split into two groups of 17 500. On Thursday, the one group of 17 500 candidates arrived at a local stadium to participate in the fitness test. They were asked to run 4KM under 30 minutes to qualify. It was almost 34 degrees Celsius as they ran. Lenny completed the run in 20 minutes and then died from dehydration. It was 4 hours before anyone even realised that he was dead - only after the most of the crowd had dispersed was he seen. 5 Other candidates died as a result of the fitness test in hospitals and one other person committed suicide. Lenny, father of two, had been the breadwinner for his family of seven and was, according to friends and family, determined to provide a better life for his family. More than 230 applicants were taken to hospital after collapsing during the fitness test. According to the doctor's report, many suffered from dehydration and heat exhaustion. 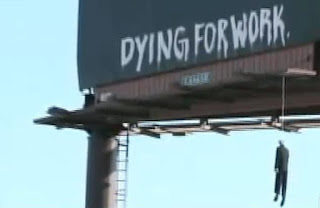 Those who say that poor people are lazy and unmotivated clearly have no idea what they're talking about. South Africa is a country where a huge portion of the population is largely uneducated, so their prospects from the get-go are limited to low paying jobs. Those who are able to find work will travel by local taxi's up to 4 hours per day, often having to take up to 4 different taxi's per trip. If you don't know about the South African minibus taxi's, let me tell you that traveling in them is no smooth sailing: the drivers generally have dangerous habits on the road (not to mention many of them not even having obtained their license legally) this is manifested as frequent accidents involving minibus taxi's; the taxi's are over loaded in an attempt to make as much money as possible for every route, so conditions inside are cramped (and many of them have ridiculously loud sound systems, blaring into passenger's ears); taxi drivers are also normally part of gang-type groups and "gang-wars", as well as collateral damage, are not uncommon. This all is braved for even the most menial job for sub-standard pay.

If 150 000 people applied for only 90 positions - in only ONE city, then it is safe to say that the problem does not lie in the unwillingness of the poor to work - the problem lies with the system not creating and supporting enough decent paying jobs to ensure that each person is able to care for themselves and their families comfortably.

It is so obvious that the way we are living now doesn't work - but why is no one willing to even listen and acknowledge that their is a problem? We are able to make a change, but if we continue to deny the obvious then we are simply dooming ourselves, our children, nature, the planet, and our fellow human beings to miserable and unsatisfactory lives. Life should be fun for everyone. Be brave enough to stand up in the face of the blatant denial of our apparently innate stupidity.
bernard poolman crisis dehydration desteni economic equal failure government income life money pay poor poverty seeking strike unemployment wages welfare work