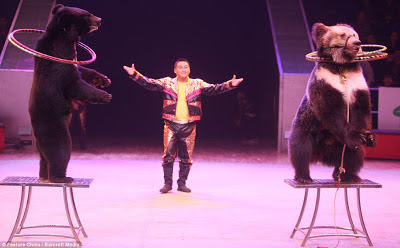 2 Black bears were used in a Chinese circus, performing tricks such as balancing acts and jumping for a skipping rope. One of the bears has a leather strap on its face to keep its mouth closed. If I was a bear being forced to perform circus tricks, you'd have to strap my mouth closed too.

I don't see the appeal in circus animals. I don't see the appeal in any sport involving an animal that is being forced to perform or compete. Yeah, sure, if you do it for long enough the animal will get used to it and a few may even enjoy it, but training an animal simply to obey aides so that you can earn money - instead of a real communication based on mutual enjoyment - is simply another system of abuse.

Most animals that have been "domesticated" or caged by humans live a life that we wouldn't wish on our worst enemies, never mind ourselves or our children. The food industry may be the largest contributor to the animal abuse industry, but it is most definitely not the only contributor. I have no interest in rating the severity or scale of the abuse or suffering animals endure at human hands, as that would simply diminish the reality of the situation. Each and every animal that suffers shouldn't have to suffer. No one case of animal abuse is more severe than another, because all of them shouldn't ever, ever, happen. 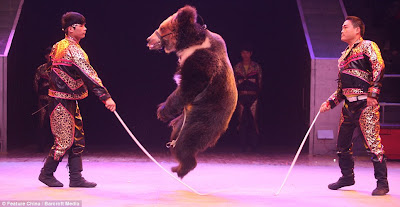 This line of speaking leads me to ponder a little more on Punishments Fitting The Crime, and I now have a scenario in mind involving animal trainers (such as the trainers of these circus bears), being ripped from their homes and families by an unknown species whom they are unable to communicate with and who seem to consider them with great disdain, wrestle them into tiny cages from which they are unable to break free and must live in their own filth, surviving on near-rotten food, and being trained every day through the use of sticks, prods, electric pokers, whips and all sorts of other fun tools to perform physical actions that have no point and make absolutely no sense because they still don't understand what the weird other creatures are saying. Also the other species is much stronger and more capable in general. Maybe they have fancy laser whips or something that really gets the humans' attention. Anyway, when the human performers have spent hours upon hours doing the same physical performances they are put into a huge tent or stage in front of hundreds of weird alien people where they must put on the show for the viewing pleasure of Mr & Mrs Alien People and their cute kids, Ally and Leon. Now wouldn't that be grand? 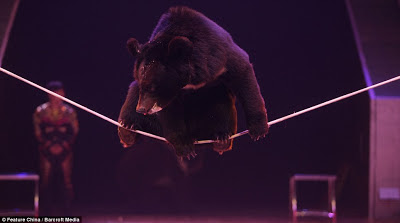 WE tend to avoid thinking of ourselves being in the place of other beings who are abused - especially animals. We have come up with all sorts of really handy responses to questions of responsibility and compassion, among which include: "I can't do anything to change their plight.", "It's just the way things are.", "Those circus people need to make a living too.", "animals don't feel pain or think like we do.", "We are meant to rule over the world and do whatever we please cos God says so in the really old book written by people hundreds of years after the alleged Son Of God roamed the Earth." (OK, maybe they stop at "cos God says so").

Stop the inhumanity. Stop the madness. Vote for a system that does not depend on abuse to function. Show your vote for an Equal Money System so that no animal need be the puppet for the humans' strings.
7 year journey abuse activism animal bear bernard cerise china circus crime cruel desteni equal evil life money perform poolman train tricks