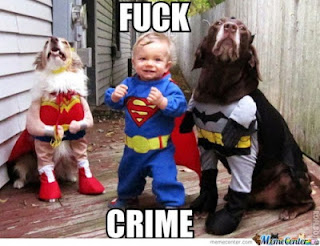 We see some pretty despicable things every day. A lot of despicable things are involved in pretty much everything that surrounds us and allows us to live the way we do. Let's face it: we're a despicable lot living in a tangled mess of our own making. There are most definitely some abuses that are far afield, that are so horrendous that they leave us speechless - maybe these require a different kind of approach...

The punishment should fit the crime, wouldn't you agree? Now I'm not talking about a person who steals food to feed their family, that's not even a crime. I'm talking about the really evil f*ckers who rape and molest and torture and kill - and who are big fat greedy corporate ass hats who roll around in money while the rest of the planet suffers.

So, what I am proposing is that whatever form of abuse these knobs perpetrates on a living being, will be done to them. We're going to need to develop our technology in certain fields, such as in extracting memories from said knobs to be able to get the detail of the punishment just right; we're also going to need to develop a realistic virtual reality machine thingy. Now, when these knobs are found (we'll also need to make a cool machine for catching ass hats), we'll extract their memories of abusing the other being(s) and then "transplant" that memory onto a super computer where it will be altered so that we can insert the abuser's consciousness into a virtual reality in which he/she is in the role of "the abused" and relives the experience over and over until they reach a point of dedication and commitment to never allow such abuse again. Obviously they will need to prove themselves for the rest of their lives and will need to be monitored to ensure they don't lapse back into old patterns of thinking. Now, for the really twisted knobs who are unaffected by being the abused, we could synthesize the inner experience of someone being abused (fear, panic, powerlessness etc) with some kind of weird drugs. If that doesn't work, we put them to death because they are past the point of being able to change.

How about dropping a few billionaires in the middle of a war-torn, desert country and leaving them to survive with no food, water or clothing. The thought makes me smile a little.

Whenever I see animal abuse, I start vividly imagining those abusers being in the animal's place and having some machine beat the crap out of them (or whatever it is they did to the animals).

All of these... speculations... are dependent on continuing within a system where abuse actually happens. Now I'm not saying that changing our natures will be easy or without mishap, but it is possible. We can change. We don't need to live in a world that leads us to think up ways of torturing the evil f*cks that torture kittens and puppies. Yes, we will need to make drastic changes to our lifestyles and cultures, but only where our actions accept and allow abuse.