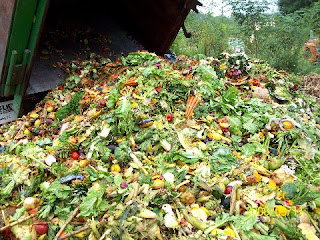 Did you know that roughly one third (1.3 billion tonnes) of the food produced every year is wasted or lost?

Here are some facts from the United Nations Environment Program site:

The impact of food waste is not just financial. Environmentally, food waste leads to wasteful use of chemicals such as fertilizers and pesticides; more fuel used for transportation; and more rotting food, creating more methane – one of the most harmful greenhouse gases that contributes to climate change. Methane is 23 times more potent than CO2 as a greenhouse gas. The vast amount of food going to landfills makes a significant contribution to global warming.

I am sure that you will agree that this is a complete and total f**k-up. The fact that there are billions living in absolute poverty or on the breadline while so much food is wasted is, simply put, an indication of exactly how far removed we as humanity are from each other. Is it that we don't care about each other? Yes and no. When faced with suffering most people will feel immense empathy, yet often it is only when we can actually witness the suffering first hand that we will feel anything. The rest of the time, other people outside of our personal bubble of relationships are simply not included in our awareness. We don't think of all of the people who are sleeping in the cold, or living with a constant, gnawing hunger, or having to face an abusive person every day of their lives.

There are a number of solutions that could be implemented for the issue of food wastage and loss, some of which can be seen here: One-Third of Food Is Lost or Wasted: What Can Be Done

As for the issue of developing our awareness, part of our limited spheres of focus in life can be attributed to the act of trying to survive - all of our focus is placed on doing what it takes to survive and having a few personal sources of enjoyment. Another contributory aspect is that our societies have become very much focused on individualism rather than collectivism. I don't mean collectivism as in the commonly misinterpreted and ill-defined term of communism, but rather the understanding that we are all interdependent and interconnected, rather than independent and separated. Our mindsets are developed to only think about our personal lives and loved ones, and in order to change this we essentially need to change the way we think. There is a lot of material available on the internet that share different world views and potential solutions, as well as many sources exposing the flawed way of thinking AND system that we live in.

We are each responsible for ourselves - absolutely - yet we are also responsible for each other. The only way that we can make this world a better place for all life is if we all stand together within the living of sustainable and holistic solutions that will benefit the many.
awareness bernard poolman care cerise poolman change compassion desteni empathy facts human impact loss nature personal poverty solution starvation survive