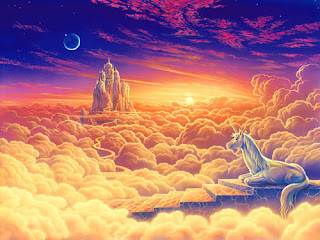 So it seems like my audio recordings are not very popular so I will be going back to written blogs.

Today I pose the question: What is an alternate reality?

Well, it is when you create an image in your mind - this image can be a belief, opinion, self definition, perception, whatever - and believe that that "image" is true. So let's say you believe that you have a particular destiny, and have built up a series of images and really good feelings around this belief - so much so that you will actually think that this destiny of your is going to manifest any moment.

Unfortunately, you will most likely not recognise that you are living in an alternate reality until something forces you to see. Usually by then you've already build up a collection of consequences. Most often, it's the friends and family of someone living in an alternate reality who will try and help that person. Unfortunately (again), it is unlikely that anyone will be able to support them to "get back to reality" - they have committed themselves to this belief and will not let go of it easily.

Hell - most people in the world are living in alternate realities. Consider how little focus is put on serious global/societal issues, compared to frivolous and superficial distractions. I would go so far as to say that any person who deliberately (or otherwise) ignores the problems in the world is living in an alternate reality - for the simple fact that these problems affect ALL OF US. It's not like global warming won't touch the rich.

So, what do you do? What CAN you do? If you're the one living in an alternate reality then you probably won't know it, or you may refuse to consider that as being a possibility. Any person can walk this solution, everyone probably really should: cross reference yourself! If you have a thought, make sure it's based on reality - on what is real. Is the thought valid? The next point you can check is whether the thought is creating an emotional response within you - do you feel a certain way when you think about that thing? If there is any kind of movement within you, positive or negative, you need to flag that thought for further investigation.

If you are trying to support someone else who is living in an alternate reality, realistically there is probably not much you can do. Supporting another person requires that they are willing to support themselves - if that is not present then you're going to be banging your head against a wall. Even if someone wants to support themselves to change they will probably "fall" back into old habits (more than a few times) so you are going to need some serious patience. It will not help to attempt to challenge the person's belief - that will simply clamp down on it tighter. You need to try to show them what they are doing in such a way that they will actually be able to see it - there is no magical answer to answer specifically "how" to do this - you're going to have to test what works and what doesn't - mostly you will probably be finding out what doesn't work.

Given how easily we believe the things going on inside our heads, it's quite a tricky, though common point to walk through.
behaviour bernard poolman cerise poolman change delusion desteni equal global human illusion life lose nature psychology reality support touch warming