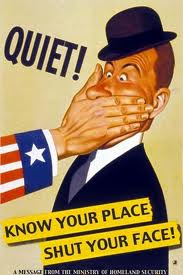 There are some very interesting people on the world - I say this with the utmost respect that can be afforded to those who just don't give a shit (which is none, obviously). There are people who will abuse others outright, like hurting them physically and saying things with the intention of harming. And then there are people who abuse in a more subtle manner, so that they don't appear to be abusers at first glance, or even second.

I find it quite odd that so many people who claim to live with love and light and rainbows and sunshine are so quick to anger in their discussions. On the internet especially, some of the most nasty comments I have read were from people claiming to be "spiritually enlightened", love-spreaders and light-shiners. Obviously the title of Rudest Assholes is not exclusive to them, but they are definitely title holders.

What is possibly the most interesting thing is that these enlightened love-lighters will actually use hate speech and defamation to defend their own beliefs, without even realising what it is they are partaking in. I have seen a person attack the reputation and integrity of another person (whom they had never even met), simply to deflect and keep the focus off of their own beliefs.

Since I am part of a relatively controversial group I have seen many attacks directed toward the group, or a specific member of the group. All of these attacks are based on misinformation and propaganda created by a few very dedicated beings (who are at least a little bit obsessed), who make it their task to twist words and meanings, make assumptions and make up stories all about the group. Now I'm not saying that people should never disagree, or should never question, but is nastiness and abuse really necessary?

Writing and saying things with the intention of causing harm is hate speech, no matter if you like the person or not. These people use fear and blind hatred to spread their toxic bile as far and as wide as they can - consider every race-based discriminatory system in our history - hate, fear and propaganda was used to create an unjustified and undeserving stigma about non-white people. Why haven't we learned from our mistakes? Why do we fall so easily into the trap of attacking the character of another? How many important parts of our history were born into atmospheres of hatred and fear?
abuse bernard poolman desteni enlightenment equal human Jesus life light love money nature people positive propaganda religion self spiritual