January 30, 2013
This is a continuation of my previous 2 posts, The End Of Work? and Vanishing Jobs 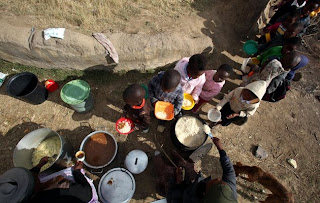 Though this country produces sufficient food for its population, skyrocketing prices prevent the poor - most of them urban households - from getting adequate nutrition .
The hungriest people are in Cape Town (80%) and Msunduzi, in KwaZulu-Natal (87%).
A five-year study by the University of Cape Town's African Food Security Unit Network has exposed a food crisis that constitutes a "death sentence" for many and which the government has labelled as "serious".
It found that, in Johannesburg, 43% of the poor faced starvation and malnutrition. Researchers believe the figure could be higher.
According to the UN Food and Agricultural Organisation, 870 million people worldwide are chronically undernourished, 234million of them living in sub-Saharan Africa.
The plight of the hungry was highlighted in 2011 when four children, aged between two and nine, died in a farmer's field as they began an 18km walk in search of their mother and food in Verdwaal, North West. It was later discovered that they had not eaten for more than a week.
The Department of Agriculture, Forestry and Fisheries last week revealed that 12million South Africans are "food insecure".
Food security refers to the ability to access adequate nutrition - food that is affordable, hygienic and culturally accepted.
Food Bank SA spokesman Keri Uys said yesterday: "South Africa is in dire straights. The entire country is affected. It is not just rural areas.
"Every day millions of people go to be bed hungry. There are children whose daily food is half a white-bread sandwich. How can you bring up a nation on this?"
"The implication is a death sentence." - Times Live

This story, currently circulating through South African news agencies, is all the proof I need to show that the way we allow our system to function is abusive, selfish and cruel. Somehow, there are actually people who think of this story and others like it as acceptable, for various superficial reasons, but the main one being that people do not want to give up everything about their own comfortable lives - at least that's what they believe will happen. So many people believe that any kind of global solution goes hand in hand with "not being able to live comfortably" anymore, since they are apparently not willing even to investigate the entirety of possible solutions, they prefer rather to gossip and tear down the efforts of those they see as threatening their self concept. Global solutions do not mean that we will all live in mud huts, true global solutions should ensure that everyone has their own space to live and thrive as they choose - just so long as it does not in any way abuse another being.

How can we continue to accept and allow a system which does not even provide for the most basic needs of every being? In any other part of our lives we will delete and rewrite a system which does not function effectively and efficiently - well, at least that's what we'd like to believe about ourselves and our natures. In reality, we develop and accept faulty systems on a daily basis - just think about all the different aspects of our lives: education, healthcare, nutrition, hobbies, community service, animal welfare, child welfare, elderly welfare, disabled welfare, employment, power supplies, the list goes on and on. Every part of our lives has been touched by this stain of greed, laziness and self interest. All of our little daily systems are designed with the intention of profiting a few elite, placating the in-betweens and downright exploiting everything else.

If there is enough food but millions are hungry and starving and malnourished, then we have a serious problem. We can make the system work for everyone instead of just for a few.

Obviously every country thinks its own needs are most desperate, but how does nationality make any difference to the capacity for feeling? How does religion affect one's ability to survive without food? How does culture make one person more important or less important than another? How does income status make one person more deserving than another, or than an innocent child? Why do we allow this discrimination to continue?

In order to change the world we must be willing to ask the hard questions and to step on a few toes - how else can we ensure that discrimination is ended so as to allow for a new era of equality and acceptance?
afford bernard poolman capitalism communism desteni discrimination equal expensive food hungry income life lifestyle malnutrition money poverty shortage socialism south africa weather