Day 282: Desperation Beneath The Shining Lights Of Capitalism 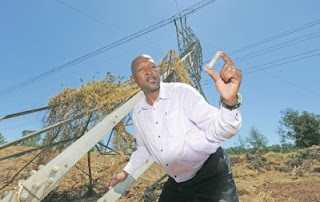 FOR a mere R500, thieves almost caused the collapse of the main power feed from Eskom to Msunduzi, which would have resulted in a city-wide blackout that could have lasted days or even weeks.
The disaster was narrowly averted thanks to an alert citizen and the recent storm.
However, it will now cost the city more than a million rand to repair the damage.
Msunduzi spokesperson Brian Zuma yesterday took journalists on a hair-raising ride along a roughly hewn path through Camps Drift to examine the leaning pylon and see at first hand the brazen action of the thieves.
On the way he related how the storm had saved the city.
Someone in the area had noticed that instead of standing upright, one of the pylons was leaning to one side. The electricity department was alerted and technicians were dispatched.
When they got to the site, they found that all the bolts in the lower half of the pylon and the steel cross-bars at the base had been removed.
Zuma said the massive structure would not have been able to balance in that manner for long before it toppled.
He believed that the recent storm had already nudged it into a tilt and the municipality was alerted to the pending disaster in time.
Zuma said they had learnt that the steel crossbars would fetch just R500 at a scrap metal dealership.
The city hired a front-end loader at a cost of more than R50 000 to flatten a path to the pylon, and the reinstallation cost is estimated at over R1 million.
“In this case, for R500 in someone’s pocket, the city and its residents will end up paying millions.” - The Witness

So, with no regard for the consequences, one or more individuals, in an act of what could only have been economic desperation, removed steel components from a main tower that provides electricity to an entire city. The parts that were stolen are worth only a few hundred Rand at a scrap metal yard (US$1 = almost R9, so it would be the equivalent of between $50 and $100 worth of steel). This paltry amount is way below the poverty line of R3000 per month - and even that figure is not enough to ensure a decent life, far from it.

What do incidences such as these show us? They show us that our society demands acts of abuse and injustice in order for us to survive and that anything less that persistent vigilance and willingness to defend ourselves will be met with outright extortion. People steal because they have no other options - they cannot afford to be considerate of others since they are consumed by their own survival. We all do what we must to ensure that our loved ones are taken care of - there is nothing different about thieves. We believe that it is in our nature to be abusive and exploitative - but it is simply what our society demands. If asked what the perfect life is, we will all always say something about peaceful and stress free life that we can enjoy - this is closer to our nature than manipulation and abuse is.

The funny thing is: the best thing we could ever do to ensure the wellbeing of our loved ones is to implement a new system that is based on valuing life instead of money. This system would require each of us to consciously change the ways we live and think, and while this may be difficult, it is certainly attainable. Instead of thinking only of our own interests, we must consider the best interests of all life. Instead of alternating between fighting and begging each other for survival, we must freely give it to each other. Instead of trying to get rich and live like kings, we must allow everyone comfortable lives. Will we be able to share so freely in this life? Maybe we are 'too far gone' - but I'll be damned if I don't try.
africa behaviour bernard poolman desteni economic equal human nature learned life money poor poverty psychology slavery struggle survive theft theory