Day 281: Friends And Family - Where Corruption Is Born


Johannesburg - Consultants are costing the government billions, and both officials and the private sector should clean up.
That’s what emerged from a performance audit of government consultants released by the Auditor-General on Thursday.
The report is littered with examples of badly managed consultant contracts.
Fixing SAPS armoured vehicles for the 2010 World Cup cost more than double the planned price, and a fifth weren’t finished in time. The SAPS planned to spend R80 million refurbishing 200 armoured Nyalas, but costs hit R177m and 44 Nyalas were delivered late.
The Correctional Services Department hired consultants to manage other consultants, and paid an IT consultant R12m in 2009, but three years later, the project still wasn’t finished.
The Department of Defence had the expertise to maintain the Limpopo border fence, but paid a consultant R18m to do it.
Water Affairs signed 46 variation orders on 14 projects, adding up to R509m.
An SAPS IT contract for a firearm-control system was signed for R93m, but the contract was extended four times to finally cost R413m and, five years later, wasn’t finished.
Environmental Affairs had hired a consultant since 1999 in critical positions such as chief financial officer.
The same department spent R9m on a consultant to advise it on procurement for its new building, more than R5m higher than the next bidder, and the hired consultant didn’t have all the skills needed.
The report found that over three years, consultants have made R102 billion out of the government.
Of the R102bn, about a third (R33.5bn) was spent by national departments and two-thirds (R68.5bn) by provincial departments.
The report looked at 2008/9, 2009/10 and 2010/11 and focused in particular on payments by national departments. - iol News 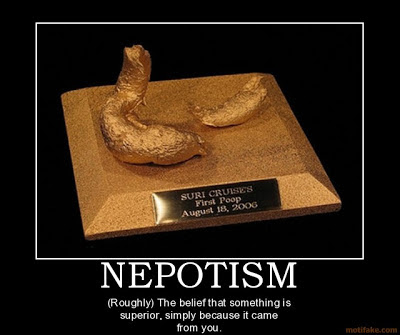 Is it the nature of humans to award preference to friends and family, simply because they are friends and family? Is there some part of our genetic makeup that forces us to always choose to uplift only the people we care about personally? It seems as if nepotism makes the world go round. How many of us have had, or are in employment because a friend or family member recommended us? How many of us are actually not even best suited for the position that was delivered to us so dutifully and loyally by our dearest dear? Does the fact that there are personal feelings involved in this... transaction absolve the involved parties of wrongdoing?

I am certain that so called nepotism is a common occurrence in most human societies across the globe. I know for certain that South Africa is full to bursting. Why wouldn't there be nepotism, when there is so much to be profited? Just think of all those kickbacks, all that money that we don't have to declare to the tax collectors, and we certainly shan't forget to mention the high regard that these nepotismic actions afford us within our family/circle of friends. Truly, why not nepotism?

Consider this: how many people would be deprived of work and income if they were hired purely for their skill and suitability? Seriously, we simply cannot afford to stop it now - now that it is the grease and gas that fuels our economy (when I say our I mean of course the important people of the world, not the riff raff living in mud huts and tiny apartments) and keeps all the cogs (skilled workers who don't deserve good jobs because we don't like them, so now they work in McDonalds or whatever filthy manhole contributes to our incomes these days) running smoothly.

What makes one child any more or less important, unique, innocent, brilliant or special than another? Or is it only we who perceive a difference where there is none.
advice bernard poolman desteni dream job education employment equal gain income interview kickback life money nepotism profit rich tips