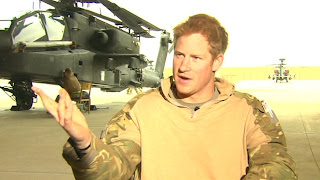 
Harry has been serving for four months as a co-pilot gunner (CPG) in southern Helmand province -- considered a Taliban heartland -- and flew on scores of missions with the trigger to rockets, missiles and a 30mm cannon at his fingertips.
No one is saying how many insurgents Harry might have killed but toward the end of his deployment, the 28-year-old, known to his comrades as Captain Wales, shared some of his feelings about combat with reporters while on duty in the massive military base known as Camp Bastion. He said it was sometimes justified to "take a life to save a life. That's what we revolve around, I suppose."
Harry explained how the roles of Apaches and CPGs have changed since his previous deployments in 2007 and 2008. "It used to be very much: front seat, you're firing the whole time.
"Now, yes we fire when we have to but essentially we're more of a deterrent than anything else.
"Our job out here is to make sure the guys are safe on the ground and if that means shooting someone who is shooting at them, then we will do it," said the prince, third in line to the British throne.
"It's not the reason I decided to do this job. The reason to do this job was to get back out here, and carry on with a job." - CNN 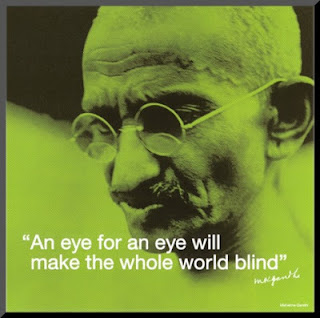 I don't know about you, but most of this quote above doesn't make any sense. How does "take a life to save a life" make any sense? Oh right, this is when we're looking at the world through our "love goggles", where only the things that I personally care about actually matter. Obviously that is how Prince Harry is looking at the world: some people matter and some don't. It's OK for some to die (because they don't matter) but not OK for others to die (because they do matter). There is a bit of a fuzzy line when you start to consider that most people have someone whom they matter to - but that will just hurt our brains, so we won't think about it.

My next point of, let's call it "uncertainty", within the quote above is the part about why Harry is out there, killing people in Afghanistan. According to him, he is there to "carry on with a job" - that's not a very concise reason, so I'm going to have to try and connect the dots a little. He is there to do a job because it's there to be done..? He is there because he needs a job..? I give up. We'll never know. Oh, wait! I've got it! He is there to keep certain people from being shot by other people, and the way he does this is by raining bullets down from his perch in the sky. Because, you know, those people doing the initial shooting are the ones that don't matter.

It's easy to fall into the trap of labeling people and then treating them according to those labels. When we think of people as "things" instead of as living, breathing, feeling beings who experience life very similarly to ourselves; who love and are loved; who feel hunger and pain; who have mothers, fathers, brothers, sisters; people who are trying their best to live as well as they know how. Granted, most people don't know how to live without resorting to abuse, but this is not immutable.

So while we are so busy calling each other names, we forget about the real parts of life that need attention: food for all, shelter for all, sanitation for all, clean water for all, education for all and so on. Our little realities of "the people that matter" are miniscule, and we refuse to consider any other people from outside our box of precious belongings.

There is an entire world filled with trillions of living beings who all want what we want: to live happily and in peace. We don't have to live like greedy a-holes who have no qualms about killing people according to their labels. Yes, it's for sure that we have made a huge mess andit's going to take time, patience and dedication to clean it up - but we can clean it up.
Afghanistan bernard poolman desteni equal eye for an eye family Ghandi human life matters money Prince revenge royalty UK value war we are one world