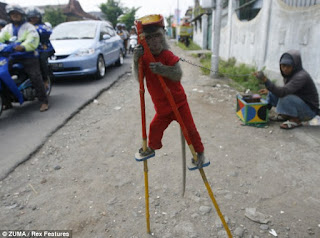 
A tiny monkey is walking on stilts, clad in a red tracksuit and a ghostly doll mask, as cars and motorcycles drive past on a busy road in Surakarta, Indonesia.
Neneng, a long-tailed macaque, is only nine months old but can already put on a show as he plays a toy-guitar, walk on stilts and does a handstand in a red cowboy hat.
With a yank of the chain around his neck, his master Iyayi changes the act to entice those driving past to throw a coin or two at the performing primate, one of thousands on the streets of Indonesia. 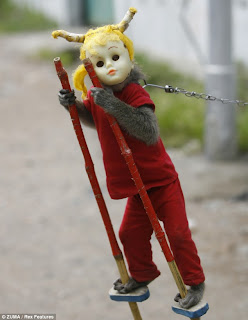 The practice of training macaques to become street performers has been a part of the country’s culture for decades.
It has been growing in popularity since the 1980s when it changed from being part of ‘monkey circuses’ entertaining children in the poor neighbourhoods, to move to markets and road-sides.
Their cruel training methods include ‘the hanging monkey’ which is designed to wean the monkey off walking on all fours.
The monkey master chains the monkey to the ceiling and ties the monkey’s arms around its back, forcing it to stand on two legs.
This goes on for as long as it takes the monkey to find its balance on its hind legs, only allowing a daily food break before it is strung up again.
Neneng’s monkey master Iyayi bought him for 200,000 rupiah (£13) and spent then trained for three months to perform a variety of tricks.
Neneng is expected to make 50,000 rupiah (£3.20) to 70,000 rupiah (£4.50) per day for his master.
The Jakarta Animal Aid Network (JAAN), a charity that feeds rescued performing monkeys, explains that the conditions in the slums is what keeps this practice going.
‘Poverty drives the handlers to exploit the monkeys in the hope of earning small change,’ the charity writes on its website. 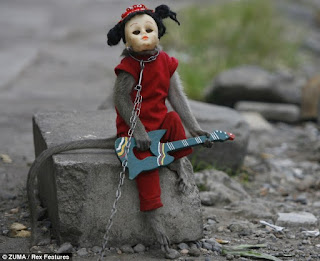 'From the forest they are captured and taken to 'monkey village', where the animals are trained to take part in street performances.’ - Mail Online


Oh, the horrors we commit just to survive

The price we pay to be alive

Is the pain we inflict on innocents

Worthy of our miserable lives

Or are we simply plummeting down the rabbit hole

Speeding toward our demise? 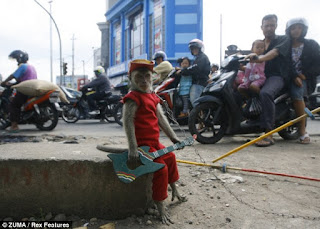 When we kiss our baby good night

And look into their eyes

Do we see a life of joy ahead for them

Or only the continuation of our lies?

Is our comfort today

Worth the price our children will pay

Maybe even us some day? 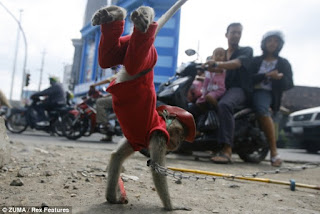 When we meet our victims in the afterlife

Will we be able to say

I did everything I could

I treated you the way you would

I did everything I could