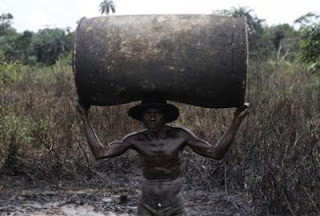 
The wooden fishing boat navigating Nigeria's mangrove swamps is powered by a generator balanced above its volatile cargo.
Shimmering crude oil fills its hull, almost indistinguishable from the polluted water in the creek.
Here and there on the banks, people coated in oil wade through greasy mud in patches of landscape blackened and stripped of the thick vegetation that makes Nigeria's oil-producing delta so hard to police.
Plumes of grey or yellow smoke fill the air as men who will give only their first names go to work in an illegal industry that the government says lifts a fifth of Nigeria's output of two million barrels a day.
Oil 'bunkering' -- hacking into pipelines to steal crude then refining it or selling it abroad -- has become a major cost to Nigeria's treasury, which depends on oil for 80 percent of its earnings.
Major General Johnson Ochoga, who leads a military campaign against bunkering that was stepped up last year under orders from President Goodluck Jonathan, told Reuters nearly 2,000 suspects had been arrested and 4,000 refineries, 30,000 drums of products and hundreds of bunkering boats destroyed in 2012.
Yet the complicity of security officials and politicians who profit from the practice, and the lack of alternatives for those who undertake it, cast doubt on the likelihood of success.
Forty-year-old Goodluck, who shares his name and tribe with the president, says he would much rather have got a respectable job, except that, despite the billions of petrodollars coursing through the region's creeks over decades, there aren't any.
"This refinery is the only thing I know that can ensure my survival, at least for now," he told Reuters, sitting under a small makeshift iron roof shelter from the boiling sun, his hands sticky with crude.
"Doing this you can make up to $60 in a day," he said, gesturing with a nod towards oil drums full of homemade diesel shaded by smoked-blackened palm trees.
Most of the stolen crude is shipped offshore, with the remaining 10 percent refined locally. There is plenty of demand for the diesel, kerosene and gasoline Goodluck makes by boiling up stolen crude in a steel drum over a wood fire.
Nigeria's legal refineries have been left largely defunct by decades of mismanagement and corruption, with the result that fuel stations in the world's 12th largest oil producing country often run out of supplies.
"PUSHED TO THE WALL"
Goodluck gets up at dawn in the traffic-choked city of Yenagoa, in Bayelsa state, a humid labyrinth of creeks, swaps and mangrove forests that is home to 2 million people, mostly subsistence fishermen.
Little of this fragile wetland environment has been untainted by oil. Blackened mangroves that died slurping spilled crude from polluted waters blight the landscape. Local women dry out cassava on hot orange gas flares.
After breakfast Goodluck makes for the jetty where his boat is tied. On his way to his secret refinery, he also uses the boat to run a part-time paid ferry service.
The plumes of dark smoking rising from sites dotted along the riverbank for miles around show he is not alone in depending on illegal refining, an activity in which he sees no wrong.
"Though it is illegal, the oil belongs to all of us. This is our own share," he said, echoing the justification given by many locals who feel they have been left out of the oil riches flowing from underneath them.
Thieves often tap unguarded pipelines in broad daylight, hacking into them and connecting a hose to pump the oil onto a barge. They then sell it either to international criminal networks or to local refiners like Goodluck. - Reuters

It is difficult to acknowledge the ferocity of the cycles that so many people are trapped in, especially for those of us who view the world and it's problems through one form of screen or another. We live in a world where most of us do things that we would rather not do for the sake of survival - and in some cases, comfort or luxury. We all within us harbour the small dream:  if only I didn't have to do this and that I could simply live and enjoy life and my family. We all want to live in paradise, but somewhere we got our wires crossed and started rationalising and justifying why we have to continue living miserable lives in a miserable world.

Living in poverty is a hell of a lot different to suburban America, or even urban America. Education is becoming a global problem, even in USA, but comparing the worst American school to the worst African school is like comparing a chicken-mayo sandwich to a turd: there simply isn't a contest. Just being in a community of mud and scrap huts, you can feel the hopelessness, the knowing that the people living here will never have a better life - how could they? Majority of them are uneducated, unskilled, emotionally damaged and socially inept. These people will never get decent jobs, nor will they receive quality service from the government (eg health care, education, housing etc) - they simply don't know what to do in order to demand these things, and in the off chance that they do get these things, they don't know how to use it to improve their lives.

So many people who were lucky enough to be born into a developed and relatively safe area simply do not understand what it is like to live in an underprivileged community. These privileged observers claim that people are only poor because they are lazy. I would like to see these privileged people spend a day performing hard labour in the African summer sun for US$10 a day. I have never seen a white man work as hard as a black man in Africa. I am sure the same can be said in many different variations across the globe: there is always the rich standing over the poor who will break their backs just to be able to eat dinner.

We are an imaginative and versatile species. We have the ability to change our habits, thought patterns and emotional patterns to be able to support and manifest a world where everyone is content and no one is fighting to survive. We choose instead to focus most of our creative abilities on destructive or downright useless developments. We are the only ones who can drag us out of this cesspool we have created.