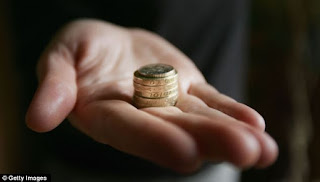 
Britain faces another 10 years of austerity as the government struggles to repair the country’s battered finances, a hard-hitting report warns today.
The vast deficit racked up by Labour will not be eliminated until after 2020 and possibly not until 2023, according to the Centre for Economics and Business Research.
The report also warns that Britain will be stripped of its coveted AAA credit rating as the national debt spirals further out of control.
But it adds that the UK will avoid a triple-dip recession this year - but only just.
The think tank expects a 0.5 per cent slump in output in the final quarter of 2012 followed by growth of just 0.2 per cent in the first quarter of 2013.
The last Labour government borrowed a record £159 billion in 2009-10 as the financial crisis struck and the economic boom gave way to the biggest bust in living memory.
After coming to power in May 2010, Mr Osborne pledged to eradicate the budget deficit within five years - far faster than planned by Labour.
Borrowing fell to £142 billion in the Coalition’s first year in power and again to £121 billion last year but the decline has not been as fast as the Chancellor predicted.
He has now extended austerity to 2018 as he struggles to balance the books - but the CEBR report warns that this is still too optimistic.
It forecasts borrowing of £68 billion in 2017-18 - more than double the £31 billion expected by the Treasury - making deficit reduction ‘a three Parliament problem’.
The report blames weak growth and the government’s failure to cut spending, which looks set to have risen by 2.8 per cent in 2012, the fastest pace of growth since 2004.
‘There seems to have been a setback in reducing public spending despite alleged austerity,’ said Mr Corfe.
The failure to reduce borrowing more quickly means the national debt will hit almost 85 per cent of national income in the next five years and will not start falling until 2018-19, according to the report.
Mr Osborne initially planned for the national debt to peak at 70.3 per cent of national income in 2013-14 but now hopes it will not rise any higher than 79.9 per cent in 2015-16.
The national debt was just £200 billion 20 years ago and around £300 billion 10 years ago.
But it spiralled to £800 billion under Labour and is set to hit more than £1.5 trillion in the next five years - or £60,000 per household in Britain. - Mail Online


The story is the same in most governments around the world: "oops, we borrowed too much because we spend too much and now we have to cut down on welfare and life enrichment services and keep the military and high officials' salaries. This is what will save us." There is definitely something funky about that kind of reasoning. If national economies only weakened after the so called "recession", then what is it that actually initiated the "recession"? Is it bad debt, irresponsible spending, improper oversight and management of funds, too much debt, lack of growth? Maybe it was a combination of these factors, all compounding until one day, inevitably, they overwhelmed and then proceeded to crush all the economies in the world. One should in fact consider the economy and the forces influencing it to be an independent entity with free will - it is not the human that directs the economies as Creator, each economy has a mind of its own.

What if all the governments in the world were to stop funding a military (obviously without fear of attack) and funnel that money to actually building the country and making it a safe, comfortable and pleasant place to live in? What if government officials were thinking about the citizens of the country instead of their own survival and enrichment?

Enforcing further funding cuts will only sink the inhabitants deeper into a pit of debt despair - while at the same time all the people at the top who are making the decisions are steadily getting pay increases. Imagine if top government officials and royalty were forced to live the absolute worst life that is lived in their country, so that the people at the top will actually have a reason for designing and enforcing a system that would benefit and protect everyone. If all the worst things in the world were happening to us we would very promptly find a way to resolve and prevent further suffering for ourselves. Just because it is not us starving or sick or cold doesn't mean  that we are then absolved of all responsibility.

We are the ones who have created and now work inside the building called "capitalism" - maybe at the outset there were some good ideals and principles, but those are all gone now and capitalism has become a dirty and perverted shadow of what it was supposed to be. We have the power to change this system to value life instead of money.
basic budget Cameron cliff cut desteni equal fiscal homeless income low money politics poor rights save spending survive UK world