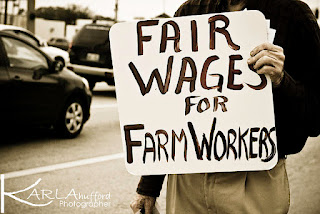 
Balancing the scales between farmers and workers over increasing the minimum wage for farmworkers could prove almost impossible.
Increasing wages to R150 a day, which is what farmworkers in the Western Cape are demanding, would still not provide workers and their families with adequate nutrition, while if average wages rise by more than R20 from current levels, “many of the typical farms will be unable to cover their operating expenses”, a report by the Bureau for Food and Agricultural Policy (BFAP) has shown.
The report, which analysed agricultural wages in South Africa, was compiled by independent analysts and researchers affiliated with the universities of Pretoria and Stellenbosch.
According to the report, an increase in minimum wages to R150 a day would shrink agricultural output, cause a spike in food inflation and mean an increase of R3.5 billion in the cost of labour for the top 10 agricultural industries ranked in terms of total employment.
The bureau found that smaller farms would be more vulnerable to closure than larger ones.
In the medium term, the risk of higher food prices due to higher costs of production would be unavoidable.
Although the initial impact would be small, it would gain momentum over time.
It would take four or five years to have an effect on apple and pear farms. After this, price pressures arising from lower supply could result in the average price of an apple, for instance, increasing by 6.4 percent by 2022, according to BFAP calculations in the R150 daily wage scenario.
It is evident in the BFAP’s analysis that the gap between what farmers “can pay” and what farmworkers need to survive is wide.
The monthly income of the poorest 50 percent of rural Western Cape households is R2 015, which means the family can afford a basket of basic food items only 1.7 times a month.
By contrast, a household of two adults earning R150 a day and receiving two child support grants would have monthly income of R6 860 and would be be able to afford six baskets of basic foods.
A household with one working adult earning R84.90 a day on a fruit farm has a monthly income of only R1 783.
Francis Wilson, the acting pro vice-chancellor for poverty and inequality at UCT, said this report revealed the heart of South Africa’s dilemma when it came to balancing the scales between inequality and a sustainable economy.
“Finding a way to balance this will be extremely difficult. Of course there is a need for putting upward pressure on farm wages but at the same time we don’t want to generate massive unemployment,” Wilson said.
Although organised labour previously reported that farmworkers in the Western Cape earned an average of R69 a day, the BFAP report showed that permanent farmworkers, especially on commercial fruit farms, earned more than the current minimum wage.
However, even on these established fruit farms, seasonal workers earned, at most, about R84 a day.
Econometrix chief economist Azar Jammine said the only way to justify wage increases was if farms increased production, which was unlikely at the moment.
“Without that increase in production some will have to close operations or retrench… It’s a sad and difficult situation,” Jammine said. - Business Report

This report is based on current economic circumstances in the province of Western Cape in South Africa.

Farm workers and domestic workers receive notoriously low wages in South Africa, very few of these employees will earn more than R2000 per month. This amount is equivalent to 230 US Dollars per month. Many of these employees will be the sole provider for a large and extended family. The employers are, in most cases, unable to pay more than what they currently do without sacrificing their own budget in one area or another, this is especially true for the farmers (as is commonplace across the globe). So there are millions of people working terrible and hard jobs for a very low wage, simply because there are no other work opportunities for them. In South Africa, even with the large workforce of low income earners, there is still an even higher number of unemployed people who rely solely on government or family handouts.

Many people argue simply for more job creation, for creating a country that will utilize the human resources available to it. While this may alleviate certain woes, what does it do for the low income earners, who are earning precisely what their employers can afford to pay them? Will a low or nonexistent unemployment rate decrease the gap between high and low income earners? Unlikely. We can see that in every country in the world there are different classes: low, middle and high. Creating jobs for everyone as a stand-alone solution can not and will not solve our global issues, as the issues stem from greed as the apparent nature of human beings. We want more and more and more, and take more and more and more.

Without addressing the core issue within our actual societies, cultures, traditions and world views, we stand little chance of truly making a change. The way we live now is the way we all accept to live together - changing our worldviews may not be easy, but it certainly is not impossible.
bernard poolman desteni economics employment equal farm human nature income job life money political poor poverty profit salary south africa work