As the video starts out detonations are few and far between. The first three detonations represent the Manhattan Project and the two bombs that ended World War II. After a few representative minutes the USSR and Britain enter the nuclear club and the testing really starts to heat up.

Even though the video does not differentiate between sub-critical "safety" tests and full detonations, you get a good idea of the fever of the nuclear arms race. 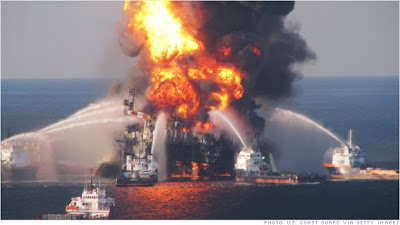 http://money.cnn.com/2013/01/03/news/companies/transocean-oil-spill/index.html?hpt=hp_t3 - Offshore drilling firm Transocean will pay $1.4 billion in fines and penalties in connection with the 2010 oil spill in the Gulf of Mexico, the Justice Department announced Thursday.

Transocean owned and provided a crew for the Deepwater Horizon rig, where an explosion in 2010 killed 11 men and triggered the worst martime oil spill in U.S. history. The well was capped three months later, but not before millions of barrels of oil spilled into the Gulf.
Transocean was contracted by BP (BP), which leased the rig and directed staff onboard. BP agreed in November to plead guilty to criminal charges in connection with the incident and pay $4.5 billion in government penalties.
As part of the settlement, Transocean subsidiary Transocean Deepwater Inc. agreed to plead guilty to violating the Clean Water Act.
"These important agreements, which the company believes to be in the best interest of its shareholders and employees, remove much of the uncertainty associated with the accident," Transocean said in a statement. "This is a positive step forward, but it is also a time to reflect on the 11 men who lost their lives aboard the Deepwater Horizon."


Money seems to have the power to cure all wounds, even contamination by black oil and nuclear fallout. Apparently we can buy our way out of poisonous food sources. I don't entirely understand how this is possible, but all the people in the world seem to believe that it is, so I must just be missing some big piece of the puzzle. I suppose if those of us who actually matter live in areas of the world that are pretty and don't appear to have any kind of environmental damage, then it doesn't really matter what the rest of the world is like.

As far as I'm concerned, as long as I am happy, safe and relatively healthy - the world is a good place. I am aware that there are some rather unpleasant activities and such that take place in the world, but there simply isn't anything I can do about it and it just isn't worth it to go and waste my life on some hopeless cause. At least I can do some good in my current position. For example, I can refuse to participate in one or another abusive industry, such as factory farming. If I don't eat meant, then my hands are clean of the responsibility and I validate my status of being "a good person".

I suppose that the best part about being me is that I can buy my way through all these so called "economic crises" and come through unscathed. If there was some huge shortage of food or some such, I could just get a bunch of body guards and stockpile a bunch of food, kill anyone who tried to get near it. But what am I saying? All that money we've been throwing at the planet should be more than enough to write off any negative outcomes.

Cut down a tree? just pay a fine and it will be like it was never gone.
Spill some oil into the ocean that kills and poisons millions of beings? Just throw some money at them and they will all come back to life with as much vigor as they ever had.
Detonate a few warheads by mistake? Just cover it up by saying it was for "the good of the country" and there will be no side effects.