Day 261: Employ Adam - What About Everyone Else? 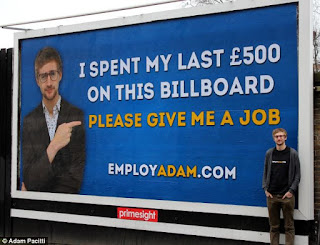 
No one can deny that the job market is bleak for many.
Thousands of unemployed people spend their days tirelessly filling out application forms, composing cover letters, and trying to think of a creative answer to 'what would you say your weaknesses are in the workplace?'
And after unsuccessfully applying for countless positions, Adam Pacitti had had enough - and spent his last £500 on a billboard asking employers to give him a job.
The 24-year-old dreamed up the way of promoting himself, and his talents, three months ago, after sending out his CV for at least 250 different positions.
Adam, who lives with his family on the Isle of Wight, said he wanted to add something extra to his application - and as video CVs are now a popular form of a applying for jobs, decided to go a little bigger.
Now, after creating the website employadam.com, and yesterday posting the billboard and Tweeting the image, the would-be producer has watched his campaign for employment go viral in less than 24 hours.
He said: 'After posting, I had about ten re-Tweets in an hour.
'Then my phone exploded, and now I've had over 7,000 re-Tweets.
'I'm incredibly humbled that people have seen I've thought outside the box, and then shared this with others.'
After graduating this year with a First Class Honours degree in Media Production from the University of Winchester, the student worked in an arcade, filling the two-pence machines and stacking toys.
He said: 'I was grateful to have a job, but it's not something I'd really like to do.
'I came up with the idea for the video and billboard about three months ago, and managed to save up £500 while working.
'I called in favours from friends and asked studios, and made the video, and decided to post the billboard in London, because that's where most of the jobs are.'
Adam said he was forced to come up with the unusual approach after spending six hours a day filling out application forms.
He said: 'It's like a job in itself, it's difficult - you have to tailor your CV to each job, you're often asked to do a video project - and I only had two interviews after sending off my application.
'It can be disheartening applying for so many job and not getting anywhere.
'I have a good degree and relevant work experience, but others have more experience than me, so perhaps I don't look like the most attractive candidate. - MailOnline


Why is it that in order for one to have a good chance of getting a good job, one must be "unusual, quirky, out of the box"? Not that those qualities are bad or wrong - the way that they are used now, by implying that in order for one to matter or to be special/important, one must rise above the rest and prove one's worth. The simple truth is that each and every one of us should be afforded the opportunity and security of getting a good job or income.

This system of ours only supports the very few, only those who are unusually talented or those who are ruthlessly brutal. My point is that our system should support all beings, equally. Yes, there are people who are more talented, practiced, adept, experienced, etc in particular vocations - that doesn't mean that they have a different value than another being.

Why do we make it so difficult for ourselves to get a job? We have all either heard of or experienced the time and effort that must be put in just to apply and interview for a job - this procedure is based on the premise that competition will promote and support the "best of the best" to advance in whatever their particular career path may be. It is just another reflection of how our system (which we created) is completely biased in who and what it supports. Only a small number of elite advance, while the rest struggle to make ends meet, stuck in dead-end and unsatisfying jobs.
advertising bernard poolman degree desteni equal future gap income job life market money pension poverty revolution salary security seeking study university