Day 257: Every Baby Should Be The Cutest In The World 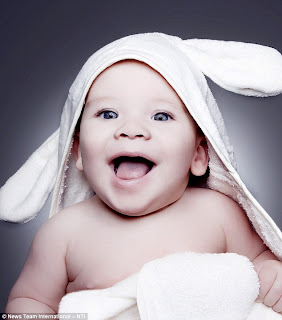 
With his adorable smile, soft skin and gorgeous blue eyes, it is little wonder Rowan Stone wowed judges and beat 2,300 other children to be crowned Britain's Cutest Baby.
At just seven months old, little Rowan is set for stardom after winning a modelling contract which seems certain to land him TV appearances and magazine shoots.
Thrilled parents Becki, 29, and Thomas 28, spoke of their delight at learning their 'cheeky chappy' had taken the title.
But they joked their pride and joy is more likely to be excited by the £500 worth of toy vouchers he won in addition to his year-long contract.
Marketing executive Becki, from Solihull, West Midlands, said: 'I am so thrilled to find out Rowan has been named as the winner. We are so proud.
'We had been told by a few friends that Rowan could be a model and when we saw this competition we thought why not, never thinking he would win.
'We had just wanted some shots for posterity, to remember him in the cute stage - but the photographer told us we should enter the competition.
'We always knew he was a little cutie, but it's lovely to have some recognition of the fact. - MailOnline


What is the point in singling out babies for their appearance? Babies don't know or care anything for our superficial standards - they just want to be content and experience this new thing called life. A baby does not choose its appearance, nor does it make plans for the day, week, month or year. That we are willing to exploit innocent babies (animals would fit into this argument just as well) to make some moola simply shows us for who we are.

We are each the same as the money-hungry, greedy, inconsiderate bigheads running corporations, autocratic governments, democratic governments (just less overtly than their "opposites" in totalitarian states), and all those ridiculously wealthy religious orders - to name but a few butt heads found in this society of ours. Just because the rest of us are not as good as exploiting and "getting away with it" than those bigheads doesn't mean we are any less fat-pig-headed than they are.

I actually don't even have an analogy for this one - there is nothing comparable to exploiting babies or animals for money that we are not already exploiting.

Why do we not value and support every baby in the world like we do the "cute" ones? Why is physical appearance the primary factor in determining the value of a baby and subsequently, the amount of ourselves we should invest in it? And what of the babies doomed by their place or circumstances of birth - do they not also deserve warm, loving care? Or should they suffer due to their unfortunate and unlucky circumstances of birth?