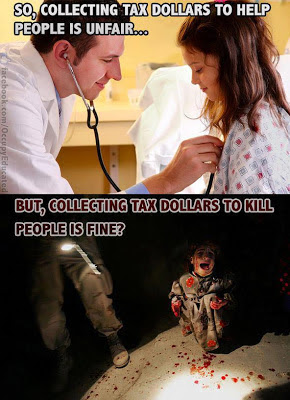 Some countries appear to be very opposed to the idea of welfare services - news agencies will pump out stories on a daily basis about some or other "welfare misappropriation" and comments regarding the apparent laziness of the people living on welfare multiply by the hundreds. America and Britain are currently quite vocal about these social issues.

The main issue that people seem to have with welfare is that they perceive those who are receiving "benefits" to be lazy and undeserving, mainly due to they themselves seeing the whole situation as unfair since they have to work while these other people get to have the same standard of living without having to work at all. If we compare the resistance toward the welfare system toward the military system, it seems as if something is amiss in the value system of our society - why else would we perceive the sharing of resources to enable a life of dignity to be "bad", while the destruction and occupation of other countries (for obscure reasons) is seen as "right" and "just"?

Yes, there are people who take advantage of welfare systems - but this simply indicates an issue within our society as a whole: that people value their own interests and comfort above doing what is best for the community as a whole is a failure of our society. Changing the welfare system to try to curb this abuse does not solve, or even consider, the fundamental problem that is apparent within each one of us individually and therefore within our community as a whole. It's the same old story, as with every other area of our miserable track record of Humans Living On Earth. Every problem we are faced with, we try to "get around it" by applying some form of a band aid that will curb the bleeding for a short time, only to be soiled and fall off, exposing our tender wound to have become infected. We need to go to the cause of our issues and implement real solutions that are aimed at full and total healing.

It is easier to blame the welfare system, though. It is easier to point fingers and proclaim the fault to be at some other's feet. It is easier to just believe everything we are told. It is easier to live with hope, than to face this terrible mess we have made.
America bernard poolman Britain budget desteni equal finance human nature lazy life military money services social society state system value war welfare