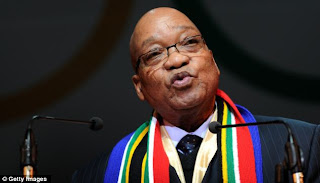 But now South African president Jacob Zuma has taken the bizarre step of warning black Africans against owning a dog.
President Zuma said that owning and walking a dog, and even taking one to the vet, were not African activities, and was just copying white culture.
The president, 70, who faces investigation by the country's anti-corruption watchdog over an upgrade to his country home, is a proud Zulu and adheres to traditional practices - including polygamy. He has six wives and believed to have fathered 20 children.
Speaking at an event in KwaZulu-Natal province, he described people who love dogs more than humans as 'having a lack of humanity', Durban newspaper The Mercury reports
President Zuma reportedly told an audience of black South Africans on Wednesday to stop adopting the habits of other cultures. 'Even if you apply any kind of lotion and straighten your hair you will never be white,' he said.
Some black South Africans responded to Mr Zuma's latest comments by posting photos of themselves being 'un-African' by walking their dogs on Twitter, according to the Telegraph.
Mr Zuma reportedly said earlier this year that it was 'not right' for women to be single and has endorsed traditional courts in South Africa in the past. - MailOnline

The South African government calls this country the "Rainbow Nation". This is a land where no man, woman, or child is discriminated against; where gay marriage is legal; where the press is kind of relatively free to say what it is paid to - I mean what it *wants to*; where the constitution was created by the people, for the people; where our leading democratic party fought valiantly for freedom during Apartheid; and it is, not least of all, a nation that practices equality among all its citizens.

Well, at least that's the official story. Somehow, the freedom fighters of the Apartheid era have now become the oppressors, building themselves R200 million mansions and the like while the "lower class citizens" look on from their shacks at the bottom of the pyramid of importance. Government officials seem to find joy in making arbitrary and distasteful statements to the press, which their team of PR goons will amend by declining to comment on. The current president, Mr Zuma, made one such comment a few years ago: it was something along the lines of taking a shower after intercourse to prevent being infected by HIV/AIDS. Maybe a part of the reason for these strange statements is that many of these officials did not complete elementary schooling. But then again - I am certainly no expert.

So, if the government of our "non-discriminatory" nation is racist, where do we go from here to actually heal and move on from past wrongs? When the government leaders continuously "Stir the pot" of hatred and anger, how the hell are we ever going to move forward? When our government is continuously "appropriating" public funds to pay for their lavish lifestyles, how can we trust that those individuals have the interests of the nation and of its citizens at heart?

Fighting a war for freedom and being a hero is very different to managing a country and being faced with the opportunities for becoming personally wealthy that present themselves.
apartheid bernard poolman capitalism corruption desteni discrimination embezzlement equal fraud freedom jacob zuma life Mandela mansion money Nkandla