Day 254: Images Of Suffering No Longer Move Us 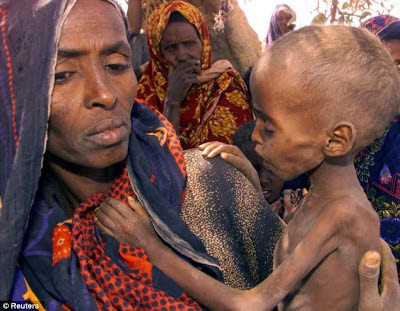 Band Aid stereotypes of Africa are no longer moving the British public and leaving people on the continent starving, Oxfam has warned.


The aid agency said the public must shake-off the portrayals of Africa promoted by the celebrity-driven campaigns of the 1980s and 2004.


Oxfam stressed the majority of people have become desensitised to images depicting issues such as hunger, drought and disease.


Over-exposure to negative media and advertising portrayals of Africa and developing countries in other parts of the world was described as 'depressing, manipulative and hopeless' by respondents to a YouGov survey of more than 2,000 people.


Nearly 50 per cent of those polled said it made them feel that conditions for people living in the developing world would never improve.


When asked to select what they thought were the three most pressing problems facing Africa over the next year, almost half identified hunger.


And although 74 per cent thought it was ultimately possible to bring an end to hunger in Africa, only one in five believe they could play an active role in this. - Mail Online


Somehow we have reached a point in our "evolution"/"progress"/"wtf ever you want to name it" whereby we can look at the image of a starving child and not care. We do not even consider that image of being a representation of the misery that so many people live daily - the funny thing is it's plain dumb luck that we weren't born into their position. We could have been a child born in Africa in a time of drought and turmoil, being left in a dusty patch of earth, our parents too weak to carry us further.

Most people perceive images of the suffering that beings endure in this life as "negative" and "depressing" - as if having a positive outlook and ignoring the world's problems will feed the hungry or stop people from being evil douchebags. Wanting to have a positive outlook may be something we all share - the reality is that it distracts from the problems at hand by luring us into being more involved with our own happiness than the dignity and comfort of others. This life should be such that every single being is in a position to be happy and positive - but until this is manifested, we must focus on developing and implementing a global, permanent solution that will put an end to all suffering, once and for all.
africa ascension bernard poolman child desensitised desteni enlightenment equal hunger life malnutrition money outlook positive poverty starvation