Day 252: Hopeless, Helpless And Without Choice 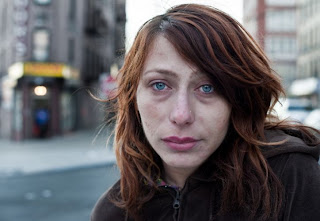 "I think what frustrated me most about the Times article was that it made it look like this is a series on prostitution," he said, "when it's in fact a series on addiction. But I would say now it's even more a story about abuse, mostly sexual abuse."
His writing, like his photos, has stayed crisp and unencumbered.
"I'm following a few subjects much more deeply," he said, "into the hospitals, into the jails, the prisons, the court system -- as well as just getting more and more access to people, in terms of going into their houses, getting more about their back stories. Most people no longer think I'm an undercover cop."
His critics call him exploitive: a privileged white man preying on poor people, mostly women. Journalists sometimes knock his methods: He doesn't hesitate to pay a prostitute $20 to take her picture, or to hand $10 to an addict in withdrawal.
To Arnade, though, what matters is how his subjects feel.
This month he visited Daphenie Hill, 22, a homeless prostitute serving time at the jail on Rikers Island.
When he arrived, Hill wrapped her arms around Arnade. Leaning over a tiny wooden table, dressed in a shapeless gray-green prison uniform, she described her first encounter with him. "I was scared," she said. "Why should I open up? But after Chris posted my picture on the Internet, I felt amazing. People commented and made me feel like I could accomplish a lot. After that, they knew my pain." - The Atlantic

If you are reading this, then the chances are that you have not experienced true helplessness or powerlessness the way that these people have. It is easy to say that these people are just "lazy and lacking self discipline", but there is no way to know exactly what one person has experienced in their life that may have influenced their choices relating to who they are or the path they walk. It is easy to discard people as being "unworthy" when we don't understand how and why they are the way they are.

It's like Hitler, in a sense: Hitler was not born inherently evil - his life was a series of events and environments and experiences which led to him developing himself to be who he was. The fact is that we are not to blame for who we are in life - yet we are responsible. There may be more people living without realising their own responsibilities toward themselves and toward life on Earth - but those who do understand and comprehend that we must live differently to the way we live now because the way we live now breeds abuse, discrimination, inequality, etc - are obliged to live and learn about these responsibilities. There is no use in realising that we are responsible for our own lives and for the lives of others as well when we take no action to fulfill that responsibility.

There are so many people who simply are not in a position to help themselves - too much abuse has been dealt to them, they have known too much horror to be able to lift themselves out of their self destructive patterns. It is in these cases that we truly face the nature of our creation - and are required to act in order to bring about a better life. There are so many without a voice - we must speak for them, only in their best interests. It is clear that changing the world will not come about in a global movement of "enlightenment" or some such, causing all human kind to move as one and not be assholes anymore - so it must begin with the minority living as the examples of the change we want to see in the world.