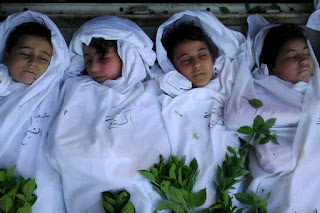 
According to the United Nations' admittedly conservative estimates, the conflict has pushed close to two million Syrians out of their homes. In other words, roughly one in 10 Syrians is now living on the run.
The U.N. says some 1.2 million Syrians are displaced inside Syria. Meanwhile, more than half a million Syrians have registered with the United Nations High Commissioner for Refugees after fleeing across borders. And there are more coming every day.
"Since the beginning of November, the number of registered refugees region-wide has risen by about 3,200 a day," the UNHCR announced this week.
Agency officials estimate there are hundreds of thousands of additional Syrian refugees who have not registered with local authorities in Turkey, Lebanon, Jordan and Egypt, because they are surviving off of their savings or the hospitality of friends and relatives. But after more than 20 months of conflict, there are signs that resources for wealthier refugees are running out.
… "I want people to feel our pain," says Ismail, who is bundled up in a sweatshirt and coat for warmth. "These are Arabs, these are humans. I just want people to feel for us."
That appeal for empathy is echoed by the lone Syrian violinist now living on the banks of Istanbul's Bosphorus Strait.
"If you look at these people as your brothers in humanity," Moraly says, after completing a mournful rendition of Niccolo Paganini's Caprice No. 6, "then you should know that what is happening to them might happen to you one day." - CNN

If it was your home being torn apart, you would be pleading for compassion too. What is the difference between a few people giving aid and the entire world living like a “brotherhood”, like one community? What would be so terrible about treating every being with dignity and respect – as we would want to be treated ourselves?

Apparently living in a world of peace and prosperity is not what we want, because we simply do nothing to bring it about. 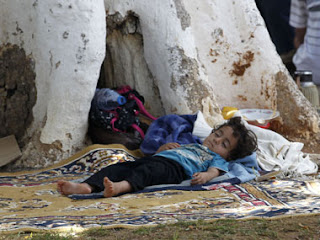 Some may think that the UN, or some other humanitarian organisations will save the world. What have any of these organisations actually contributed toward a permanent and global solution? Nothing at all – not even a theory. These organisations are the fairytales we tell ourselves at night when we get into bed, to reassure ourselves that the world is being saved by “someone, somewhere out there” – so we don’t have to. Or, there are many of us who are simply too consumed with trying to keep our own family’s needs met, working as much as possible for a barely-there wage just to get by. We work to make money to survive to save to enjoy life and then we get old and die, very often penniless.

Imagine yourself meeting one of the victims of Syria, or any country’s conflicts. When that person asks you “why didn’t you care?” how would you answer? That there was someone else doing it already, which somehow absolved you of responsibility? Or that your family was more important than their family? Or maybe that you simply chose not to make yourself aware of their plight – what you don’t know won’t hurt you?

What kind of salary do you imagine the top officials in the UN are earning? Enough to keep them and their families well secured in a nice country home, I’d wager. What does that say about their level of care and commitment? Should humanitarians live in palaces while the people they claim to care about live in tents?


It is time for us to care. It is time for us to give to others the life we want for ourselves. It is time to love all children in the world equally, whether they are our own or not. It is time to give value back to life, instead of placing it in possessions and gold bars. This life was meant to be fun for everyone – this is only possible if we are willing to give and share unconditionally that which sustains us.
abuse aid bernard poolman border casualties children compassion conflict desteni equal flee humanitarian innocent life money refugee safety Syria UN war