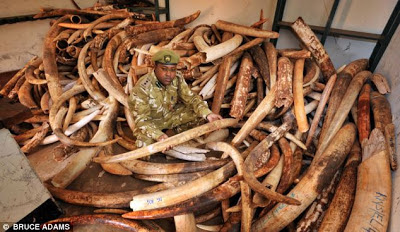 Trafficking of wildlife and products such as timber and rhino horn is one of the world's biggest illegal trades, worth £12 billion a year, conservationists have warned.
Species such as rhinos, elephants and tigers are being poached in Africa and Asia, while antique collections, museums and even zoos in the UK are at risk from criminal gangs attempting to steal rhino horn, conservation group WWF said.
Exhibits of rhino heads at Haslemere Educational Museum, Surrey, and Norwich Castle Museum have both been targeted by thieves as criminals seek to cash in on increasing demand for rhino horn as a cancer medicine or 'hangover cure' in Asia.
Rhino horn is now worth more than £37,000 a kilo, fetching more on the black market than diamonds and cocaine, leading to a surge of poaching in South Africa to record highs last year. It is particularly sought after in Vietnam.
Elephants are also being targeted for their ivory, with poaching across Africa at record levels in 2011.
The animals are being targeted in mass poaching incidents by criminal gangs armed with military issue machine guns, and there have been reports of Sudanese militias including the Janjaweed poaching ivory for profit.
A recent incident in Central Africa saw 300 elephants killed by Sudanese poachers, and WWF's wildlife trade expert Heather Sohl warned the species could face localised extinctions if poaching continued at that level. - Daily Mail


So if people make that much money with such a small risk, why the hell not? We have made life difficult for ourselves (or at least for a lot of people) and if one has no other choice for a reasonable income - well then they simply have no other choice. If your family was starving in a drought and conflict-ridden land, wouldn't you also consider alternative ways to survive? We all would, if given the ultimatum: butcher animals, or die a long and slow death with your family.

Conservationist groups and charities and do-good organisations don't really want to make a difference, because if they did, they would promote real solutions instead of taking money to do various things that accomplish virtually nothing and very often only serve to add on to the problem they claim to be fighting against. It's easy to make "token" gestures to soothe our consciences - it's making real changes that is difficult.

The problem isn't the poaching, it is the system that requires that a black market exists. We are the problem for creating and sustaining the system in this manner, for it is not an entity that functions independently of humans. If we were to remove the reason for people resorting to poaching, by for example ensuring that every being is fed, clothed, homed and educated comfortably then there will be a drastic reduction in this abuse of life.

Maybe this solution is "easier said than done" - but if we really look at our history, there is not one instance where every single human stood together in supporting and bringing forth the manifestation of a life that is best for all. And yes, this too is easier said than done - but who are we if we don't try?
africa bernard poolman black market conservation desteni elephant equal horn ivory life money poaching rhino slaughter tusk