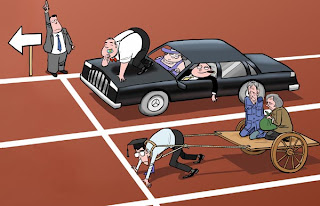 The way that news agencies and tabloids go on, you'd think that money was a part of who we are, as a person: Smart, funny, easy-going, fiery and super rich. Has money become that to us - a personality trait? Have we reached the point where we define ourselves and each other by money? Well, yes.

Maybe one day soon, upon meeting someone on the internet the initial questions will be: age, sex, nett worth? Our history, and even our present, is wrought with separation and discrimination: skin colour, culture, religion, gender, sexual preference... why not just add money onto that list?

Why are rich people treated as being more important than poor people? Even in movies/TV/gaming, the henchmen are dispatched mercilessly even though they were only trying to feed their families - and the really evil f*cker, the boss, is shown mercy and given a "second chance". Why should one person be entitled to more, simply because they have a larger stake in the continued existence of the illusion of money?

I imagine that one day, maybe sooner than we think, we will all be forced to were some kind of mark in order to declare ourselves as having a particular income/worth. This way, there will be no mistaking the "superior natures" of those who have lots of money.

The illusion that there is equal opportunity goes a long way in keeping us all in line with supporting the system - as long as we believe that there is a chance, if we work really hard,  that we will also be rich. The reality is a stark contrast though: there are only a small few who benefit from the system, while a vast number are just getting by, and an even larger number of people who have to fight daily just to survive.

By turning money into a part of who we are, we are almost ensuring that it will be a controlling factor of all of our lives. Every day, we wake up in the morning and say to ourselves "My name is *insert full name here*, and I am able to do anything I set my mind to" - well, either that or "I will never get out of this cesspool". All the f8ckers with far too much money just wake up happy, thinking to themselves that they were so clever to game the system and win.

We need to ask ourselves how far we will allow our tryst with money to go on for. Will we wake up one morning and realise that we've been complete idjits and then change our ways and bring forth heaven on earth - or will we just keep on the way we're going and end up with an uninhabitable planet and raping and pillaging and possibly apocalypse type zombies formed by nuclear and chemical warfare? It all comes down to us: What will we choose...?
apartheid bernard poolman conspiracy desteni discrimination elite equal Illuminati life money poverty power segregation separation value wealth worth