Day 231: And Our Government Fails Us Once Again 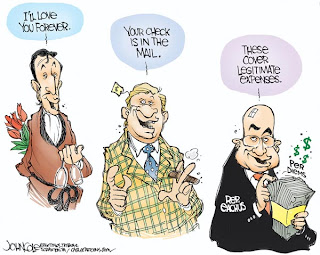 A South African newspaper, The Witness, Had 2 front page stories all about the failings and corruption of the South African government today. You can read one of the stories in the link provided above. It describes how one of the KwaZulu Natal municipalities was defrauded our of R12 million by known and unknown people. One of the culprits is the chief financial officer. The charges against him and others are related to water scams and other irregularities in the water service unit at the municipality.
The arrests that have been made so far are in connection with charges of corruption, maladministration, fraud and other irregularities. One service provider allegedly gave the chief financial officer as much as R135 000 in "gifts".

The second article details a cache of agricultural equipment and supplies to the value of about R5 million being discovered by MEC Meshack Radebe at Department of Agriculture offices in iNchanga, KZN. This followed a tip-off he received by an anonymous source. The items found at the site include 6 tractors, several ploughs, and fertilizer spreaders, as well as fertilizer bags and seed - which had rotted and was no longer useable - all this was found standing in tall grass. Some of the equipment was broken, but others hadn't been used since being bought in September 2011. The equipment was useless in the particular area it was found in - it can not be used in that are - according to the MEC.
This discovery may just be the tip of the iceberg, according to The Witness, as some R140 million in irregular expenditure has reportedly been uncovered in the department.
The spokespersons from other political parties are quite chuffed with this discovery, now having more ammunition for their (verbal) assault on the ruling party, African National Congress, in the press.

This is unfolding at a time when the ANC is under a lot of scrutiny and public pressure, what with the president's luxury village thing and all the striking in the country.

Our current governments are set up in such a way that it is far too easy for people to exploit the systems. This is why we need to design a new system that functions according to principles such as transparency, equality, and the fulfillment of rights. We need to choose a new way of living, because our current ways are not working. I vote for the Equal Money System because it is the only truly democratic system that is being proposed. The Equal Money System is based on honouring the potential goodness in every person - we don't have to live in a world where we are always fighting and competing for survival. Give the gift of a dignified life to every being. This is what the Equal Money System proposes.
apartheid bernard poolman budget communism corruption democracy desteni equal irregularities life money politics resource based economy socialism spending Zuma