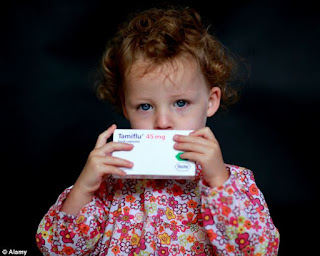 Companies in Britain producing legal drugs such as Roche, which produces Tamiflu, are not legally required to make available, to the public, researchers, or to doctors, information about whether their products actually work or not. The British government has spent 500 million Pounds stockpiling Tamiflu - and it may not even work.

Obviously, without any data about the effectiveness of a drug, there is no way a doctor is able to make an informed decision when prescribing medication. The fact that Tamiflu is such a widely used product, without any proof that it actually works, is an indication of exactly how corrupt the medical and pharmaceutical industries are. In the United States, a legislation was passed 5 years ago, requiring that all drug-trial results be published within a year. In January, the British Medical Journal revealed that only one in five trials had complied and that no fines have ever been levied against those trials that did not comply.

What does this say about our doctors, who have made an oath to do no harm? How can they do no harm when they don't even know the full effects of the medicines they are prescribing? And what they hell do these pharmaceutical companies put in the drugs that makes them so unwilling to share their trial information? Obviously there are a substantial number of government officials involved as well, or else these legislation's would not exist.

This goes to show how little the people who are in charge of these companies, and those who work for the companies, actually care about the lives of other people - they appear to only be concerned with their own survival and comfort. What does it matter if someone else's child dies halfway across the world, or even halfway across the city - as long as my family and I are protected. I wonder if these people would give the drugs they create and protect to their own families?

I vote for an Equal Money System because it will ensure that every aspect of society, government, products and services will be absolutely transparent. This would imply that only people who feel like they have something to hide, like these drug companies, will be opposed to this proposal made by the Equal Money System. Show what you will stand for.
autism bernard poolman corrupt desteni drug elite equal FDA flu Illuminati legal life money scam side effects Tamiflu vaccination