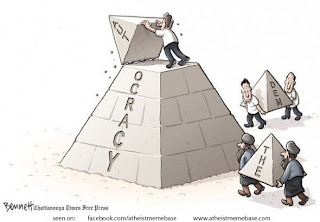 Wikipedia defines a democracy as a system of government in which all eligible citizens have an equal say in the decisions that affect their lives.

Egypt's Muslim-led assembly has raced through approval of a new draft constitution without the participation of liberal and Christian members.
Critics fear the move, which saw the assembly vote unanimously to retain the principles of Islamic law as the main source of legislation, could lead to restrictions on women's rights and freedom of speech.
…
The document also states that a woman must balance her duties towards her family with those towards outside work, implying that a woman could be held accountable if her public role is deemed to be in conflict with her duty towards her family.
…
The president has been locked in a stand-off with senior judges in Egypt since he issued an emergency decree last week which said his decisions could not be revoked by any authority - including the judiciary. - DailyMail
Does a true democracy even exist in our world? We try to make our ideals and ideas sound beautiful and transcendent when in reality we have no intention to actually follow through with them. Maybe some may say that a democracy can also be constituted of elected representatives of the citizens - but we all know that these "elected" representatives are seldom truly representing the best interests of the people and only took their positions due to some very influential friends and buckets of money (giant buckets).

How can we call so many nations "democracies", when they so obviously function against the wishes - and even the interests - of the citizens? These so-called "elected representatives" represent only their own interests - they are the ones who have groomed themselves to have the best smile, to learn which compliments and words of flattery have the most desirable effects, to learn which words stir up emotion within people, and to manipulate any situation to make it look to be in the interests of the nation when it is really in the interest of the "elected representative".

Money should not be the deciding factor in who is best suited to represent the wished of the people - the deciding factor should be a person's skill, ability and willingness to dedicate themselves for a period of time to live and breathe only that which is best for all. Transparency should not be optional - every aspect of government functioning must be transparent at all times, as every government action or policy must be based on what is best for all - if that is the case then there will never be a need for secrecy.

I vote for an Equal Money System because it is a real democracy in which every single aspect of public policy and/or government will be based only on what is best for all - and will then be voted on by any person wanting to contribute. Read Economist's Journey To Life: Day 147: Constitutional Equality and Voting In An Equal Money System for further info.
bernard poolman capitalism Constitution corporate desteni dictatorship election equal human life money president representative restrictions rights