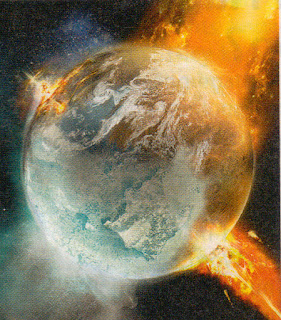 So we are edging closer to the end of the world, apparently: 21 December, the end of this age and the beginning of a new one. Or not. There are different views and opinions, all of which seem to have some kind of "irrefutable proof", or "irrefutable gut feelings/messages from God/whatever". What is a fact is that the whole concept has created quite a stir across the globe, inciting all sorts of odd reactions in people preparing for the end.

He is so afraid of the rumours he has spent his whole life savings trying to build his very own apocalypse-proof 'Noah's Ark'.

...He is so afraid of the rumours he has spent his whole life savings trying to build his very own apocalypse-proof 'Noah's Ark'.
The vessel, which has cost him ¥1million (£100,000), measures 21.2m long, 15.5m wide, 5.6m high and displaces about 140 tons of water.
Lu, from Urumqi, Xinjiang Uyghur Autonomous Region, admits it's not much to look at, but is confident it will serve its purpose.
...
In France, the authorities have been forced to ban access to a sacred mountain, rumoured to be a haven from the apocalypse, because hordes of believers have been flocking to the region in recent weeks.
Legend has it that the Pic de Bugarach in south-west France will burst open on that day revealing an alien spaceship which will carry nearby humans to safety. - DailyMail


The interesting thing is that theories relating to all the various apocalypses are based on/derived from Western Chirstian thinking from the last 1000 years - so it seems that we are all suckers for drama and tragedy. Nowhere in the Mayans' artifacts is the "end of the world" or the "apocalypse" mentioned, which means that someone actually decided to create the myth out of thin air. Maybe this person(s) had an evil scheme to become rich by exploiting the fears of the people to buy stuff that they would only buy in the face of an imminent "apocalypse".

What happens when the world doesn't end? What of all the people who sold their possessions and quit their jobs and moved to the mountains? What happens to the guru's and prophets who are shown to be only attention-seekers?

The whole concept of "the end of the world" is very conveniently entrenched into the minds of millions of people, who, conveniently make up the majority of those who control the money in the world - and therefore those who run the show. Now the ideology of apocalyptic thinking is based on the resignation that the world will be ending, so we might as well do whatever we want to it to benefit our own ends. Obviously this contributes to the destruction of our planet, the depletion of natural resources, the genocide of animals, plants, fish and insects - because while all of us "little people" are just trying to get by and take care of our own, the "big cahones" are busy raping the planet and living it up in opulence and excess.

I vote for an Equal Money System because it respects the Earth and those beings we share the Earth with - regardless of the continuation of life on Earth. It endorses the responsible and considerate use of resources to ensure a safe environment that will be able to support life indefinitely.
2012 bernard poolman calender debunk desteni end of the world equal exodus guru Jesus life Mayan meek money Noah's Ark prepare prophet spaceship spiritual