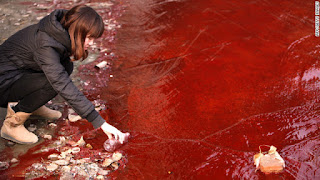 
China, for one, has a drinking problem.
I discussed this topic with a group of experts in a Fortune magazine forum recently held in Beijing.
China's water crisis looks grim, the panelists agreed. The United Nations says China is one of 13 countries with extreme water shortages.
The problem is partly demographic -- it hosts 20% of the world's population yet only holds six percent of the world's water resources -- but is also exacerbated by rapid and short-sighted development.
Strong economic growth has turned the country into the world's second largest economy but at the expense of the environment.
The Yangtze River, once the lifeblood of the country, now flows a foreboding blood red, possibly due to industrial pollution, experts said.
Chronic droughts plague important agricultural regions like Shandong province, which produces most of China's grain. - CNN

So if our so-called progress goes hand-in-hand with the destruction of our planet, where the hell are we "progressing" to? Imagine China, 20 years from now in the year 2032: up until then, profit had taken priority. Leaders feigned concern and action for the preservation of life sustaining natural landscapes and resources, but in the end, the government functioned for one thing and one thing only: money. The air and water quality slowly deteriorated, but those in positions of wealth and power were able to purchase protection from the elements. The once booming population began to dwindle as more babies were born with defects and death rates rose among the young and the elderly.

What kind of world will we be living in in the years to come if we are so quick to hack and slash away at that which sustains our lives? We claim we do it to survive, but that is a deceitful excuse. We exploit our planet and destroy the lives of billions of beings so that we can continue to maintain and justify our illusion of freedom. We think that lying, cheating and stealing our way into positions of power earns us the right to live like kings without regard for any of the peasants who are unwilling or unable to do what it takes to be able to purchase freedom. That's what freedom really is: something to be purchased. We think we a re born free, but if we were born free then we wouldn't need to purchase our rights to life.

But then again, who cares anyway? The Chinese got themselves into this mess, and the system is a demonic and independent entity that needs to be overcome. We are all in fact only responsible for ourselves and the things we deem to be worthy in our lives. War in the Congo? They are just a bunch of idiots with guns and they are not my responsibility. Millions of children living on the street, scavenging for scraps to survive and suffocating themselves in trash bins to stay warm? Where are their parents? I am not responsible.