Day 216: The Wealthy Are Destroying Our Economy 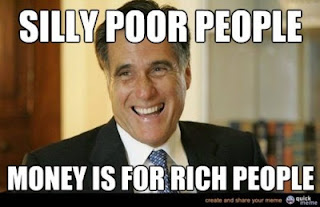 In the Sunday Times dated 18 November 2012, there is an article titled "Guess what? There is such a thing as too much money" (written by David Le Page) describing the causes and outcomes of economic inequality, mostly focused in South Africa.

After the miner massacre at Marikana not so long ago, public figures have been having to respond to an increasingly sharp questioning surrounding the realities of economic inequality in South Africa.  The public officials and commentators have responded with big words like "solidarity" and "symbolic steps", but have not actually proposed a real solution which means that either they don't care or they just don't know how to improve the economic dilemma.

In contrast to the evasive and dismissive tactics of the South African government, the president of Uruguay donates 90% of his salary to charities and chooses to live on a run down farm and drive an ancient Beetle. At least he is taking a step in the direction of actual change for the betterment of the people he is serving.

The very existence of excessive wealth actually creates poverty: people are rarely "naturally poor" - they are mostly poor because they have been shoved aside by the powerful, by apartheid, by war, by big businesses, by climate change effects of the carbon emissions of the wealthy and the big businesses, by having their health trashed by pollution and exacerbated by the lack of proper health care.

We are not almost 20 years since our first democratic, free and fair election in South Africa, and yet the majority of blacks still do not have real political power. Political power comes from access to information, communication, transport and real social networks. Starting any kind of purpose driven activity to improve the welfare of a people requires resources.

Between 2006 and 2009, executive pay in South Africa rose 200%, while average worker gained a measly 15.4%. A British run study calculated that the highest paid London city bankers destroy 7 pounds of social value for every pound of financial value they generate.

The bottom line is that those who have the power and position to institute real changes, do not do so - they cling to their ridiculous amounts of money as if it is the very air that sustains them. If those who are able to change the world so easily are not willing to do so, then those of us who are left must act - there simply is no other option. We must act to institute a system that will actually protect and serve the rights of every being.

I vote for an Equal Money System because it is a system that is based on these ideals - a true democracy that values life above money and ensures that lack will never again diminish the quality of life for any man, woman or child.
7 year journey abuse activism bernard cerise corruption david le page desteni economic equal inequality Labour life money poolman slavery solidarity south africa