Day 213: War, It Isn't Good For Absolutely Nothing 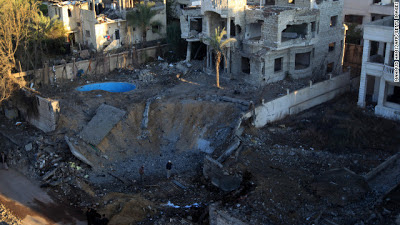 Ok so this is a continuation of my half-baked post from yesterday.

Why does war exist? The Power Principle documentary linked above (part 1) shares a whole other perspective, the idea it presents is not a new one, but it presents it in a complete picture so as to put everything into perspective. Basically, USA has been stomping on any country that shows the potential for becoming independent or powerful by labeling it as "communist" and spewing out propaganda to justify their claims. Obviously the citizens of the country don't know any better, they have no way of knowing for themselves what the real scenario is (unless they pack up and go to the "communist" country in question and investigate for themselves).

The second reason is to prevent any kind of system that may invalidate the free market system as capitalism. Many of the countries that were "liberated" had started developing a new governing or economic system that actually supported and uplifted people, decreasing poverty, unemployment, corruption and improving education and independence of the people. All USA (along with the other "powerful" western countries) had to do was spread a bunch of nutty propaganda and the whole world would start begging them to intercede and stop the "terrible acts" being committed in these poor, "communist" countries. The funny thing (well, not actually funny) is that most of these "communist" countries had held free and fair elections in which their leader was democratically elected and who then went on to institute these measures which improved the lives of the people.

After the USA "liberated" these countries, their economies crashed, a corrupt and authoritarian government would take over, social welfare would be abolished and the country would be privatized so that everything was for sale - but the citizens would be unable to afford anything and fell into a deeper poverty than ever known in the country, which would in turn perpetuate the vicious cycle of helplessness and hopelessness. Now with everything being for sale, the American and European corporations are free to come in and buy up all the natural resources.

The Power Principle exposes some documents and meetings dated decades ago that specifically and explicitly mention and organize the "elimination" of certain leaders that put the capitalist system at risk, as well as the quashing of those countries that were showing the promise of breaking free from their dependence on the western states and capitalism.


And so now Israel is going to war, 2 months before elections. Seems a little convenient...

I wonder if the same will happen to the Equal Money System - people already cry out "communism" when they hear about it - not even realizing that everything we think we know about communism is the distorted image that the power-countries want us to believe. Maybe this is then a good indication that we are on the right track?

Show your vote for the abolition of the powers of countries and the reinstatement of the unity and independence of all of mankind at www.equalmoney.org
7 year journey abuse activism authoritarian bernard cerise cold communism conflict conspiracy corporations desteni equal Gaza Israel life money Oil oppression poolman