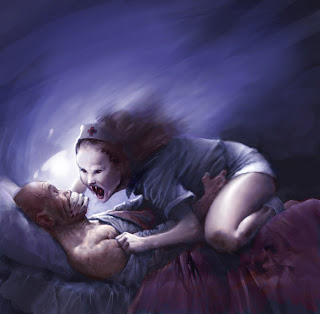 So I'm reading about Sigmund Freud's psychoanalytical theory and how he included dream interpretations as a part of discovering the underlying causes of his patients' problems. Freud reckoned that hidden, suppressed, repressed or forbidden desires/urges would present themselves as manifested content within dreams, and often in distorted/disguised form (for example, anxiety-provoking urges and thoughts could be presented as something seemingly unimportant). According to Freud, during sleep, the censoring function of the ego is less effective, thus resulting in these repressed urges "slipping through". So, these distortions/disguises prevent the dreamers from seeing the true nature of their suppressions, which allows them to continue sleeping therefore protecting sleep. If the content of the dream is so anxiety provoking that the effectiveness of the dream censor is diminished, then the dream becomes a nightmare. Does this mean that our "secret" desires and thoughts are actually so disturbing that they are capable of inducing nightmares?

Psychologists know sweet fuck-all about the human mind - that has become abundantly clear in my studies. There are many theories, some make a little bit of sense and others are wildly ludicrous. Every major contributor to psychological theories appears to have been heavily biased and so their work simply cannot be trusted. It seems to be an accepted part of hypothesizing: to become heavily invested in one's own theory to the point of losing whatever impartiality one may have had.

I have not come across one psychologist or theory that even attempts to explain the origination of any one thought. Psychology appears to be content to continue rationalizing and justifying and explaining all sorts of arbitrary things that don't really make sense, all for the sake of not having the psychologists look like twats. Psychologists claim to be experts in the human psyche and yet they show no understanding of why humans are the way they are.

The truth is that the thoughts that run around in our heads really should not be there - some people act on these thoughts (abuses such as rape, murder, torture, etc) - but those are only a small percentage out of people who actually have those thoughts. Our thoughts are the things that nightmares are made of - literally - and we don't even know where they come from, or how to stop them.

How can we call ourselves advanced if we don't even understand, or apparently care to understand, the nature of our minds. We are, with the help of our shrinks, more than happy to rationalize and repress and ignore and forget those parts of ourselves that only come out to play when no one else is around.

We don't have to live this way. We can set ourselves free from our nightmares. There is an explanation for where our thoughts come from, we must simply be willing to listen. Learn about your own mind and learn to help others to see through the veils of rationalizations at http://lite.desteniiprocess.com/
7 year journey abuse bernard cerise decipher desteni dreams equal Freud life meaning money personality poolman psychology psychopathology psychotherapy theory