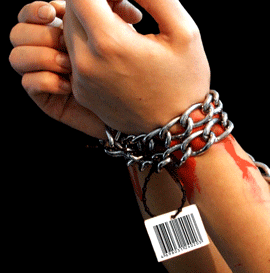 We all spend a lot of time assuring ourselves that we determine who we are, the choices we make and the life we will lead. But then how much time do we spend justifying our behaviors, thoughts and emotions with "but I couldn't help myself", or "I had no control over myself/my thoughts". Hmmmm... I have a feeling that this means something...

Now, if this applies to the very foundations of who we are and why we are, would this also not apply to the way we perceive the world and system around us? Would it not apply to our apparent "freedom" in our free market systems (ie. capitalism)? About 20% of the humans in the world run around shouting out that the system is fine the way it is and that somehow, we are all free, even when it seems like we are slaves to money. Majority of the people, let's say 79% are just trying to survive and feed their families - they don't really question why their lives are the way they are, they just go about their lives with a heavy resignation in their chests. Maybe about 1% of humans (I really doubt it's actually that many) are scratching their heads and asking "Why the fuck do we live this way?!" Maybe 1% of those guys are going, well just about every part of our lives are designed to control us - and only 1% of them are committed to do whatever it takes to stop the abuse and establish a new system.

I find it disheartening that so many people I connect with on the web are absolutely opposed to anything that's not capitalism because they believe that capitalism is the only way we can be "free". My first response to that is "Ummm.... wtf do you see freedom?". Seriously - 80% of the world lives in poverty - how the f**k is that "freedom". What is their definition of freedom? Cos if it's "the ability to live and choose without restraint from external of internal influences" - then what we have is most certainly NOT freedom. Only 1 % of humans have that kind of freedom and only because they bought it with their mountains and mountains of money.

Capitalism allows poverty to exist and makes it seem like an "acceptable" phenomenon - I cannot comprehend how that is actually acceptable in anyone's mind. Even the people living in poverty just accept the system for what it is and are resigned to the belief that it cannot be changed.

Whenever we believe something without questioning, or if we believe something we don't understand in its entirety, then there is a good chance that we are simply allowing ourselves to be enslaved. Money makes the world go round, but so does a hell of a lot of atrocities and no one even knows it.

The reason why I support an Equal Money System is that it offers a system that values life above all else. So many people automatically assume (and then commit themselves to their assumption) that our quality of life and evolution (for lack of a better word) would be diminished if we were to implement an Equal Money System - this is simply not the case. Just think of how much of our attention and resources go toward things that don't matter or improve our quality of life now (fashion, beauty, toys that break after one month, cars that last only 5 years, etc etc) - if we were to divert our attention and resources toward improving the quality of all of our lives and toward simply making life easier for everyone, then wouldn't that be better than what we have now?