Day 208: Straight As A Broken Arrow 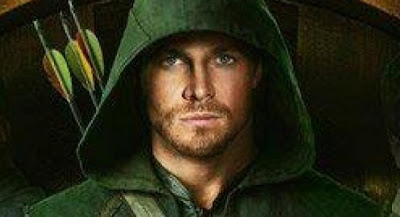 I am not quite done with the movie/entertainment/TV industry. There's a new show I've been watching called Arrow. It's a pretty regular, cliched type show based on some comic book about a rich kid "cleaning up his city" Batman-style - but with a bow and arrow (this being after he spent 5 years on some mysterious island after shipwrecking). So now he's going after some of the "key players" of the elite in his home city, stealing their money Robin Hood style and getting them sent to prison. Now his whole MO is based on "giving the bad guys a chance to redeem themselves" by not killing them wherever possible and rather getting them sent to prison - BUT, he has no problem dispatching the employees of these elite evil fuckers, majority of whom are just trying to survive. Obviously the protagonist is portrayed as the hero and what not by the show - even though the whole premise is hypocritical. Oh, and I shouldn't forget to mention the drama and teenage angst just oozing out all over the place - I mean, what good is a show without a whiny rich bitch complaining about how terrible her life is with her not getting everything she wants and feeling alone and blah blah blah.

These shows and stories focus only on some hero coming to save humanity from ourselves - but never do they promote or even breach the subject of a REAL solution that would encourage people to start looking at life and recognizing how much we are living in bondage to our lifestyles, religions, beliefs, customs, family teachings, educations, economy, cultures, self perceptions... These stories only promote the further entrenchment of our dependance and slavery to the system, propagating the belief that we should wait for a hero or a miracle to come and save us all - as well as the ever present hope that maybe I'm that hero - not that anyone would actually stand up with a practical and global solution.

These shows also promote the "elitist" lifestyles in such a way that everyone who watches the show (primarily the younger, more pliable generation) will follow suit and copy what they see. Monkey see, monkey do. This leads me to the question: why is brainwashing called that when we never emerge with cleaner brains?

Not to mention how the value of life is diminished and devalued so that only the "important" characters are presented as having value, while all the body guards and guys just doing their jobs, trying to get by, are squashed like flies remorselessly. Cos that doesn't portray our society exactly. Especially that part about no one caring about the "little guys" - which just so happens to be like 90% of the population. Hmmmmm...

I fear for our future generations, I really do. Madness surrounds us - it is time for it to stop.