Day 203: The Price Of Progress 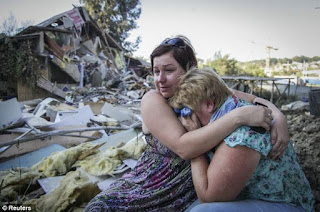 Russia is demolishing at least 1500 houses in the path of the Olympic Village for the 2014 Winter Olympics they will be hosting. If residents in a house set to be demolished cannot provide evidence that they own the land upon which the house is, then they receive no assistance from the government in being rehomed, and they basically have no choice or voice in the matter.

We like to think that every government official in the world has the best interests of the citizens at heart, but it is simply not true. Our society functions based on the principles of self interest, slavery, abuse and exploitation - so why would our governments be functioning according to any other principles? The government is, in fact, made up of people who are all just looking out for their own interests above those of anyone else.

We live by the idea that we must always compete against each other for anything we want or need, not realizing how ugly the results of this type of living are. We teach our children to "prove their worth" by beating other children - which inevitably leads to only a small percentage of successful and "worthy" children, and a majority of losers and "less worthy" children - which sets the kids up to fit into the capitalistic system very well by simply accepting that there "will always only ever be a few winners".

Sports is just another aspect of this mentality. People feel the need to prove something to the world - let's face it - no one competes simply because they enjoy doing that sport - we enjoy activities much more when we do them simply for the enjoyment. Competing has nothing to do with enjoyment and everything to do with self validation and self worth in a broken system that enforces that idea that we need to prove anything at all in the first place.

The simple fact that governments will allow and go through the expense of accommodating for a sporting event at the same time as imposing austerity measure is a very clear indication of where our priorities lie: definitely not in improving the lives of all. If we had to put as much time and energy into developing solutions to real global issues as we put into competitions (and I am including wars and conflicts in this category) then we wouldn't be implementing austerity measures, sending aide to oppressed and war torn countries, protesting inequality, destroying forests or kicking people out of their homes to build a stadium -  we would be focusing on ways to improve the quality of life for all - not just those who have been willing to crush anything and anyone that gets in their way.