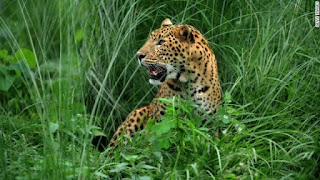 A leopard has been blamed for killing and eating 15 people in as many months in Nepal. The leopard is being labelled as "ferocious" and as having a "taste for human blood".

Imagine this if you will: you're minding your own business, living in the jungle in which your kind has lived for hundreds of generations. You hunt when you are hungry, you eat what is required and you continue about your day, climbing trees and napping. One day, you notice that it is becoming more and more difficult to find animals to hunt - and that there are strange new smells in the air. Maybe you go to investigate, or maybe you don't - but running across these things invading your territory is unavoidable: they drink from the same rivers and streams you drink from, they hunt the animals you hunt, they destroy the trees you live in, they put strange structures where once there was only the jungle. As these invaders take more space, you try to move further away in an effort to resume some form of life resembling what you once had, but these invaders just keep coming and keep eating and destroying everything. You feel the terror of the creatures they have tortured for sport and so you fear them. When you realize that there is no escaping and you are half starved, you pounce upon one of the weaker invaders while they are separated from their pack. You eat your fill as you would with any other meal and you go about your day. Your hunger is sated for today.

Is the action of the animal not unavoidable? Would you not do the same if you were in its position?

We have forced these choices onto so many animals, to eat that which they can get to as opposed to that which they normally would. How long will it be until there simply are no more animals hunting in the wild?

We act as if we are doing them a favour for letting them live on this planet with us - as if they are the invaders  - instead of it being the other way around. We build our towns and cities where once there were no humans. We push out into the jungles and plains and valleys, as if we have been granted the divine right to destroy that which has sustained us and so many others.

In a world that has an Equal Money System, conservation will not need to exist, for there would be no destruction of habitats or lives. Is that not a world we want for our children?

We don't have to live this way. We do not have to destroy so many lives and homes.

It's up to each of us to show our vote for a better world for every life on Earth.
7 year journey abuse activism bernard cerise conservation desteni equal habitat hungry life loss maul money nature poolman protection rights wildlife