Day 199: Schools Teach Cookery On Fridays So Poor Kids Can Eat Over The Weekend 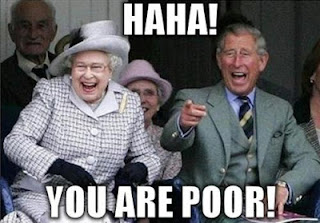 All over the world prices are rising for food, petrol, diesel, electricity, gas, steel - for pretty much everything tangible. There are more and more families unable to get by, and it's only going to get worse.

Most of the comments posted on the article above are along the lines of "What are you talking about, there are no poor people in Britain, only lazy ones who would rather buy a gaming console than food for their family" - now it is true that there are some truly terrible parents in the world, possibly more so in developed countries than undeveloped countries - who may spend more on useless stuff for themselves than on food for their kids, but this doesn't change the fact that there is a rise in basic living expenses and that only the rich are not feeling the bite.

If anyone claims that the rise in living costs does not affect us, then they obviously have more money than they know what to do with. In South Africa, the average cost to purchase sufficient nutritious food for one month is more than the state pension amount (about R1200 per pensioner), and well over half of the official poverty line income (R3000 per month). This same mentality exists within the elite white people in South Africa: those people are not poor - they get plenty money from the government or from their employer - I don't see how they can complain that they don't have enough. That's just the point: we don't see. Living on the breadline whilst having to cope with rising food, power, school, travel costs is not pleasant. Worrying that if there are any jumps in price at the store that you won't be able to buy enough food is stressful. Worrying that if your child gets sick then you'll need to cut one of your other expenses is stressful. Worrying that if the price of petrol goes up again that you won't be able to travel as much. Worrying that if the electricity price goes up again you'll need to let one of your employees go.

One or 2 meals in Britain may cost 4.50Pounds for a family of 4 - but it won't for long. In a month or 2 or 3 it will be 5.50, then a couple of months after that it will be more - that is the nature of the beast. Capitalism can only thrive where there is an ever expanding economy and consumer base - and the consumer base is dwindling. Every other day there is news of some large company cutting thousand's of jobs - that's not just thousands of individuals without income, but their families as well. AS the prices go up, people buy less, and as people buy less, the prices must go up to compensate, and the people buy less once more, and then the suppliers/manufacturers cut jobs to compensate which means there are even less people in a position to spend money, so then even less people will buy - and so the cycle continues.

Every day, more feel the bite. Every year, one hears stories of people freezing to death in Britain in winter because they could not afford to pay for heating - if that is not poverty, then what is?