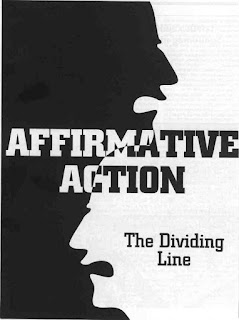 Affirmative action is a common enforcement in many countries, especially those with mixed cultural and racial heritages/backgrounds. It also covers gender, religion, sexual orientation and national origin. The whole point of affirmative action is to force "equality" in the workplace and in education, but are the practices decreasing or increasing discrimination?

In South Africa, affirmative action is seen and felt most in the racial aspect, large companies and organizations are required to have black members in controlling positions, black people will be given jobs if the other applicants (with the same qualifications) are white and corporations are required to have a certain percentage of black employees. If this isn't discrimination then what is? These actions have fostered more resentment than acceptance and simply plays right into the whole mentality that the color of our skin actually makes us inferior or superior.

Affirmative action emphasizes superficial differences between people that have, in the past, been used as tools of oppression and abuse. How does the implementation of determined and focused separation contribute toward healing the faulty and prejudiced perceptions of our society? Any time we label each other, you can be sure that it is attached to some form of discrimination or judgement. Affirmative action is all about the labeling of people.

Affirmative action does not educate the 50 year old grandmother, who was never able to attend school in the era of apartheid, so that she is able to support herself independently, nor does it teach teenage mothers how to care for their children and raise them so that they contribute to creating the best possible world for everyone.

Affirmative action is justified as righting the injustices of the past. We are stuck in the past - paying for mistakes made decades ago because we simply do not know how to move forward and rebuild a better world for our children, having learned from our mistakes. Racial discrimination is still prominent in South Africa, as I am sure it is in other countries as well. How can we live in harmony together if all we do is hold on to our hatred and spew abuse back and forth between each other? How can our leaders claim to advocate for their own actions as being in the best interests of all when they, too hold on to their poisonous anger and hatred.