An elderly couple from a rural area of Kwa Zulu Natal were hanged in their own home last week. 84 Year old Mfanalo Mkhize was found slumped on the floor with a rope around his neck and his partner, Zamekile Ngidi (65) was found still hanging from the rafters. A concerned neighbour found them after they didn't bring the corn she had asked to purchase for her. The last time the couple was see alive was on Wednesday when they had gone to collect their pension and do grocery shopping. Mkhize's licensed firearm was missing, along with their pension money. Their groceries were untouched. This comes only months after two elderly women were raped in the same area, a 94 year old and an 84 year old. 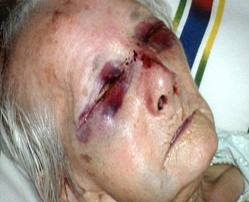 This is not the first time I've read about pensioners being raped and I've gotta say: I just don't understand it. Now it's not like a whole hell of a lot of things we do make sense, but there's normally some kid of reason, even if it is dark and twisted. For me, acts of cruelty and abuse just don't compute. I could rattle off some possible scenarios that are capable of fostering real cruelty in a person, but I simply cannot wrap my brain around it.

All I can think when I read these stories is: why do we insist on keeping the world the way it is? Why do people refuse to consider another way of living? Why does every parent not stand up and demand a better world for their child? Why do we continue to participate in and perpetuate the abuse and negligence of our society?

All of these questions have answers, of course, the answer could even be boiled down to one single reason: we don't want to change. Simple. If we really wanted to change, we would. We would stop at nothing till every being on Earth was living a contented life. We already know how determined we can be - as is evidenced by our determined ignorance.