Day 184: Every Government: An Image Of 'Fruitless, Wasteful' Spending 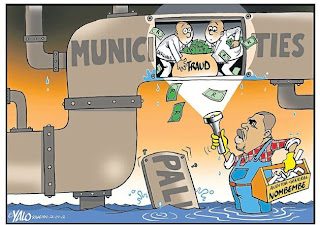 In the second article, the South African government spent R5billion on partying: food, entertainment and travel.

I first read the story from the first link in The Witness newspaper this morning. The front page story detailed how fluctuating and ever rising food prices may lead to food riots as the percentage of household income spent on food has increased to the point where a pensioner earning R1200 a month would need to spend over 100% of their salary just on buying nutritious food. Funny, how these 2 stories are in the same newspaper and yet nothing will be done to change either situation in a permanent and honourable way.

How corrupt does our system need to become before we will demand that the abuse stops? How many government officials, who have sworn to do what is best for all of the people, need to get away with stealing "public money" before we demand change? How many families need to go hungry while the elite and government thieves live in the lap of luxury?

These things do not only happen in "countries like South Africa" - these are global trends that are inherent within a system and society that functions according to profit and every man for himself.

The figures discussed above are very large ones - at the point where we are simply unable to understand or comprehend the totality of these numbers. In a country like South Africa where many families survive on as little as R1000 per month, these figures that the government has allegedly lost to the various vices and dishonesties of the officials would literally change the living conditions of all of the impoverished families. How is it possible that any government is the source of such abuse and yet no one bothers doing anything about it? None of the officials who have procured funds on the sly will be caught and because they know that they will not be caught, they have no qualms about doing it again - and again, and again.