Day 181: Failure Of The Schooling System 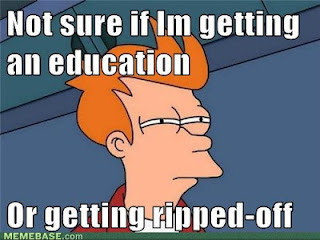 There are very few countries in the world whose schooling system is decent - and by decent I mean high attendance and high success/pass rates.

The newspaper article includes poverty, lack of access and lack of interest as contributors to the high numbers of school drop outs. One case mentioned is of a 12 year old boy who does not attend school because he doesn't get along with other students, and his mother claims he becomes aggressive every time she asks him to return to school. South Africa does not have a free education system - even though rural schools have very low fees (only a few hundred Rand per year) many people still cannot afford to send their child/children there - many people are sole providers for large families and so education comes second after food and basic survival needs.

We all know that our educational systems around the world are pretty useless - they don't teach kids very much that is practical in real-life scenarios. I know from my own experience that as soon as I had written an exam I would forget everything I had so diligently learned. For the few things that are useful to know in school, the methods used to teach are ineffective, with only a minority of students exceeding.

What has not been acknowledged is that a child's learning experience starts at home, with the parents/guardians/family, from the moment the child is born and as seen from the feral children, the first 3 years of a child's life are the years that are the most important for the formation of the child's personality and learning abilities. Obviously this concept has not received any kind of advertising as people who are dumber are also easier to control.

Children are becoming more unruly and downright abusive - simply because the parents do not know how to properly educate and prepare their children for life. Children are being spoilt with unchecked freedom without any guidance of what consequences their actions may have. Parents stuff their kids full of sugar and TV in a bid to keep the kids entertained and distracted so that the parents do not have to deal with them.

Changing the system starts with learning how it works and where its flaws are so that we don't make these same mistakes again. Investigate Equal Money as a long term solution to our ever degrading society.
7 year journey abuse activism bernard cerise desteni drop out education equal life equal money fail parenting pointless poolman poverty rip off useless