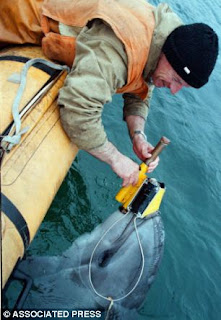 The Ukraine is training dolphins to be agents of war and destruction.

Dolphins are being trained for military action by the Ukraine navy in a return to Soviet-style underwater warfare, it emerged yesterday.
The marine mammals will be taught to attack enemy combat swimmers using special knives or pistols fixed to their heads, said a source in Sevastopol, a large port on the Black Sea.
They are also able to locate items of military interest and mark them by attaching buoys, or plant explosives in enemy territory.

I would say that this is an all-new low for humanity, but we hit rock bottom long ago and simply cannot become any more evil. What would possess any person to train animals to wield weapons is beyond common sense and moving off in the direction of bat-shit crazy.

We actually believe that war and military action is a valid path toward some form of being OK. When people join the army they do it for one of 2 reasons: to "protect" their country or to validate some idea/belief they have of themselves. Somehow we have arrived at the conclusion that fighting and killing masses of people will somehow make the world safer. Somehow we believe that weapons are "good" because they allow us to protect ourselves. If we were to all realize that if we were to choose to live together and apply what is in the best interests of all and of the planet, weapons designed for death and destruction wouldn't be in the picture at all!

Unfortunately the arms trade makes a lot of money for a few people and so is not likely to just go away, even if we wish real hard. 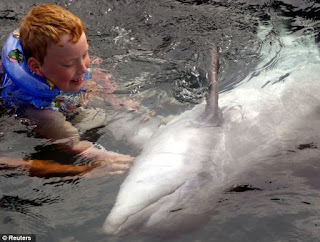 When you picture the world and life on Earth 20 years from now, what do you see? Do you see a peaceful place where the guy with the biggest gun and the most buck's has squashed all the other players into submission and now rules with an iron fist? Or maybe you see a nuclear wasteland? Or maybe you see a place, much as it is today, but with more fighting, less food, less water, less resources, every man for himself and rabid monkeys all over the place shooting people (cos they got military training too)?

Any future that includes war and weapons comes with misery and suffering. Why are we so determined to wait until war is all around us before we stop denying the fact that no good will come of it and that it is simply unacceptable?

Dolphins trained by the military to kill shit is not a good sign for our chances of creating a safe and happy life for all. Dolphins with guns on their heads is also not the last atrocity we will think up.