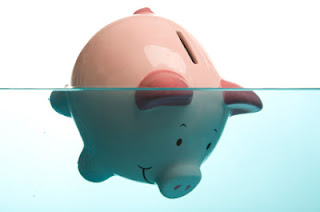 Based on an article taken from The Mercury, Kwa-Zulu Natal based newspaper, dated 10/10/2012.

Voluntary surrenders of estates in South Africa have begun to "proliferate" and a "fledgling industry" has emerged, according to a recent judgement by Pietermaritzburg judge. The number of people in poor credit standing has increased by 170 000 in South Africa in the June quarter, from 9.05 million to 9.22 million people. The number of consumers considered to be in good standing has fell by 60 000 to 10.38 million. People are turning to lawyers specializing in voluntary surrender to handle their applications to have their estates surrendered in the hopes of dropping their debts. The lawyers are making a killing, the consumers are avoiding paying their debts and the creditors are left fighting for scraps.

They call this, what we're experiencing, the debt crisis. The cost of living is getting to be higher than the average income - and by cost of living I am including transport and shelter (which means some serious loans. So, if South Africa has a population of about 45 - 50 million and 20 million earn enough money to register as able to obtain some form of credit, while 10 million of those earners are unable to get credit, that means that only about 1 fifth of the South African population can be termed as financially stable citizens. Generally speaking of course.

More and more people are seeking debt relief - but even more people are simply unable to find work to earn a decent living. In this system we've built up, workers are being replaced with cheaper, more efficient machines; corporations are taking over entire markets where there once was a multitude of small business owners; the age for retirement is being increased in many countries, leading to people having to work for longer which prevents the younger generation from getting jobs or from getting promoted.

It seems fitting that the act of surrendering one's estate to one's creditors and the application thereof would actually become a new form of exploitation. The lawyers exploit the need in the market and the consumers exploit the law to lose their debt. It also seems a little... questionable, that the number of consumers in bad credit standing increased by 170 000 at the same time as the number of consumers in good credit standing increased by 60 000 - is it just me or do those numbers induce a slight gnawing sensation in the pit of one's stomach?

We tend to believe that our society will remain intact no matter what, that "human decendy" will prevail in the case of some catastrophe... Well let me ask you one simple question: What f*ckin' "human decency"?