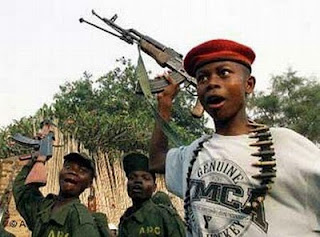 Have you ever wondered why anyone would want to use child soldiers? In the article above, a former child soldier shares his insights: "Because you can easily manipulate them," he says.

"They also want to belong to something, especially if they live in a society that has collapsed completely. Their communities are broken down, they want to belong to anything slightly organized and these groups become that."

The interesting this about this article is the few comments that have been posted:

Typical of black people, rapings violence murder etc in every country they are in.
Haiti,south africa,zimbawe etc have gone under since they were "liberated" from their mental and physical white caretakers and mentors.

it must be something genetical/racial since whites and asian dont behave like this.
The true face of Africa. Not an altruistic bone in it's body, no empathy, no civilisation, no peace - just war, death, murder and thievery. What a useless bunch of losers.

These 2 stood out the most. If it wasn't so tragic I might have laughed. I am, once again, astounded by the sheer will of the human to live in ignorance, spite and nastiness. There are many retorts that came to mind as I read these comments, but I know that nothing I say will penetrate the thick wall of stupidity that surrounds people like this. Maybe I sound harsh - but you've got to admit: it's oh so true.

We - as in humans - as in all of us - as in including black, white, brown and every colour in between - are nasty pieces of work. If we're not beating the crap out of each other and forcing children into slavery and war then we're sitting on our fat asses pointing fingers at the world without being willing to actually do anything to change the world. Plus the whole income and lifestyle gap thing - how could I not mention poverty.

Every time someone brings to light some horror in the world, one hundred people smother it with pretty pictures and pretty thoughts and pretty stories about the "good" part of life. What the hell good is the "good" part of life if only a few people actually experience it (and this is excluding all the animals and critters)? What good is a pretty sunset to a child soldier? What good is a story of love to a woman who is being held captive and raped daily? To inspire hope you say! Hope is the greatest evil of them all. Hope leads people to thinking and acting obliviously to the real world around them. Hope may make you feel all gooey inside, but that's about it. Hope is simply an energetic charge inside our bodies that induces irrational thoughts and behaviour leading to consequences such as inaction. Inaction - such as seeing a child begging on the street and, instead of recognizing the broken system we sustain, we go on about our day and our lives within the hope that things will "get better".

Do you think that hope will abolish child soldiers? No. But I know what will.