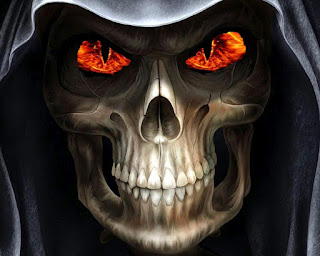 I couldn't pick just one article tonight, so here are 3.

The first is about larger predators moving their territories into urban areas to survive. Obviously we would rather shoot them than take into consideration that we are destroying their homes and with it their food and water sources. The article mentions that the reason people initially started moving out of rural areas and into urban areas was to "get away" from the dangerous wildlife. Correct me if I'm wrong, but the main reason for people moving to cities is to study/work and not out of fear for their safety. So this is just one more horror story for the angels to gossip about up in the clouds. "Look at what those filthy humans are doing now!" - well, they would be if there were any, but we all know that there's no such thing as an angel - just like there is no god - the proof being the state of the world and the beings inhabiting it.

The second article is another story about another young mother not knowing (or caring) the first thing about taking care of a child. She locked her 3 year old in a room for up to 22 hours a day. Alone. Without access to a toilet/bathroom. One big meal per day outside the room. She ignored the child's screaming and banging by distracting herself with chores and simply not being at home. The child was covered in feces and urine. The bedroom that the child stayed in was covered in feces and urine. The child had obviously not been bathed in a while and did not know how to speak. But obviously it is within the rights of a parent to be a complete douchebag, but not too much of a douchebag. The mother was quoted saying that if the child wanted food, he would ask for it. Unfortunately she seemed to be unaware of the child's inability to speak. But of course we could never mandate parenting lessons to each and every prospective parent in the world, as that would be seen as somehow violating their rights to free choice and it would make them feel inferior - we simply can't have that.

The third and final article is about a couple (The husband is a deputy prosecutor) who adopted 2 kids from Ethiopia - a girl aged 18 months and a boy aged 6. They have been abusing and neglecting these two kids so badly that the girl may be permanently blind. The boy weighed less when he was rescued from their care in September than when he had first came into the couple's care in March. He was admitted to a children's hospital in September for "hypothermia and skin lesions caused from lengthy exposure to urine", according to court documents. The doctor who examined the kids advised against allowing the children back into the care of the couple, as that would most likely mean their death. This is simply a case of 2 despicable humans enjoying being cruel and seeing helpless beings suffer. If actions such as these do not demonstrate clearly enough that we need a drastic societal reform then we are well and truly in Hell right now.