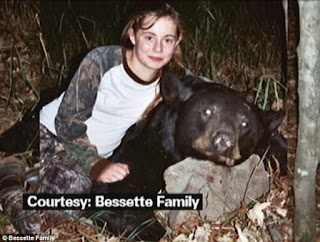 An 11 year old girl in need of a heart and liver transplant has found joy in shooting and killing a bear before she possibly dies. The following is extracted from the article linked above:

An 11-year-old girl in need of a heart and liver transplant had her wish come true when she killed a 335-pound black bear.
Taken out on one of the last bear hunts of the season in Junction City, Wisconsin, on Sunday Kaitlynn Bessette had to wait until the last day of her trip before she managed to take down the huge beast with one shot to the heart.
'When I looked through that scope I didn't see it as a bear, I saw it as a 300 pound lion that's about to attack you, so I held the gun as steady as I could, I turned my head and than I shot,' said Kaitlynn who has always dreamed of being part of a successful bear hunt.
...
'I felt thankful, like really thankful I shot a bear,' said Kaitlynn.
...
'I'm definitely proud of my daughter, she has been a wonderful blessing.' (Mother)
Kaitlynn's father Seth, was just as happy for his daughter as his wife saying, 'She's a good kid, I'm really proud of her.'
The little girl described the hunt as the day her wish came true and said that the family now hopes to mount the bear on the wall to keep the memory alive.

There are not many animals that hunt for sport and none who hunt for trophies. We stand alone in this despicable category. We also have a big-ass plaque in the hall of "I Committed Genocide Cause I Could" alongside viruses and whatever other weird germs like to wipe out entire populations every now and then.

What is it exactly that a person enjoys about robbing the life of an animal for no other reason other than " 'cos I can/wanted to/felt like it". Maybe hunters are just one small step from becoming mass murderers (of humans) because the simple reason for them killing is because they like it - they like watching the life leave the eyes.

At this point I am having difficulty with forming anything else to say on this particular article - it's all already right there. The only reason this 11 year old girl enjoys killing things is because at some point in her life, she decided that animals are inferior to humans because they look and act differently. Going from her actions alone I am inclined to conclude that animals are far superior to humans because, at the very least, animals don't find joy in acts of cruelty and self interest.

We are the rulers of this world and therefore it is within our rights and within our powers to dictate what end each of our slaves - I mean subjects - will meet.

Maybe this particular girl was simply angry at the world for being the unfair cesspool that it is by giving her a terminal illness that she decided that she would spend every moment she was able killing all the innocent and "more fortunate" creations of life. Maybe this girl is simply a psychopath, a stone cold killer without compassion who only takes glory from being in control over life and death.