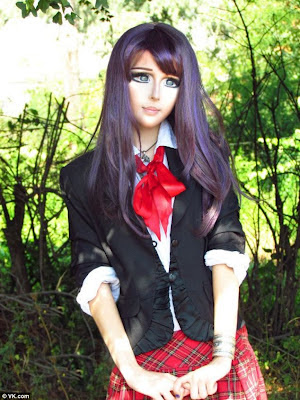 This young girl has focused her life around looking like an anime character. She has amassed a global following on social networking sites and on Youtube with her fashion and make up tutorials.

I have a question: Why would anyone want to look like a cartoon character? I know that the world is unpleasant, and I can see the appeal in wanting to pretend to be in a different reality, or in "getting away" - but what is the obsession with appearances?

Our society is very superficial - we all are aware of this. I don't understand though: how we have come to be here, how we accept and allow it to continue, when we know that it's ridiculous. Just think, this obsession with appearances has led to all sorts of terrible results: body image issues, racism, plastic surgery, the make up industry and all that goes with it, the fashion industry, the concept of "showing off" wealth, judging which species are "worth saving" based on how appealing they are to look at - nothing good has come from living according to looks.

Beauty is almost like money - not everyone has it - and therefore those who are "unfortunate" will not be afforded the same treatment or consideration. The entire system is based on exploiting inequalities so that those who are "inferior" or "lacking" will only be thinking of how they can become one of the "superior" peoples.

Even our children are becoming obsessed with their appearances when they shouldn't have a care in the world. Girls as young as 5 are parading around in beauty pageants and wearing make up and bikinis. The sexualisation of our children will only lead to the children doing what they are being taught to do: become sexual beings. This is also evidenced in the younger and younger ages of children experimenting with sex and with the incidences of rape perpetrated by young boys.

Why do we not stop this madness? Because there is too much money to be made from it and we are all to busy trying to be number one. The reality is that there are only a few number ones and that the rest of us are number lasts, we just haven't realised it yet.